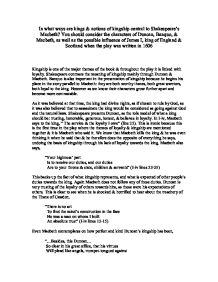 How does Shakespeare present the issue of kingship in Macbeth?

In what ways are kings & notions of kingship central to Shakespeare's Macbeth? You should consider the characters of Duncan, Banquo, & Macbeth, as well as the possible influence of James I, king of England & Scotland when the play was written in 1606 Kingship is one of the major themes of the book & throughout the play it is linked with loyalty. Shakespeare contrasts the meaning of kingship mainly through Duncan & Macbeth. Banquo is also important in the presentation of kingship because he begins his place in the story parallel to Macbeth: they are both worthy thanes, both great warriors, both loyal to the king. However as we know their characters grow further apart and become more contrastable. As it was believed at that time, the king had divine rights, as if chosen to rule by God, as it was also believed that to assassinate the king would be considered as going against God and the natural laws. Shakespeare presents Duncan, as the role model of what a king should be: trusting, honorable, generous, honest, & believes in loyalty. ...read more.

There is also evidence to show that nature is acting different, as if their natural laws have been altered, " 'Tis unnatural Even like the deed that's done, On Tuesday last, A falcon tow'ring in her pride of place Was by a mousing owl hawked at and killed" (II-iv lines 10-13) Technically even though Macbeth was the cousin of Duncan, he could not be the predecessor of the throne as Duncan had two sons, Malcolm & Donalbain. However because Malcolm and Donalbain ran away after the death of their father, Macbeth had to take over the kingship role. However as Macbeth is not king rightfully, and Malcolm finds out that is was Macbeth that killed his father, he wants to avenge his father's death, and take over to lead as king. At the end of play we find that Malcolm has conjured up an army and has managed to kill Macbeth, so that he can be proclaimed the rightful heir to the throne by divine right. This ending in my opinion symbolizes how kingship should be, that the son takes over from the father, and I think that is what Shakespeare is trying to convey. ...read more.

This shows that he does not want God to see what he is doing, because of course otherwise he would not be given the kingship through divine right. Another important issue, is the "possible influence of James I, king of England & Scotland when the play was written in 1606" on the way Shakespeare presented the characters, and how he might have altered the plot to please James I. If we look at the history of the period 1606, we find that the gunpowder plot has just occurred in 1605, this event would have terrified James I. To make James I feel more comfortable, Shakespeare links him to a descendant of Banquo, a legendary figure. This shows that he is a divine king, as we know that Banquos' sons would be the rightful heirs' to the throne by divine right. Therefore in my opinion Shakespeare presents the issue of kingship as a major theme of the book, mainly through Macbeth and Duncan, and he uses Banquo as the character to compare to Macbeth, as they posses similar qualities early on. Shakespeare has also used the theme and belief that to be king you had to be given the right by God. ...read more.