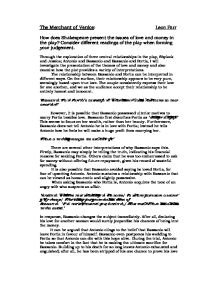 How does Shakespeare present the issues of love and money in the play? Consider different readings of the play when forming your judgement. Through the exploration of three central relationships in the play, Shylock and Jessica;

The Merchant of Venice: Leon Farr How does Shakespeare present the issues of love and money in the play? Consider different readings of the play when forming your judgement. Through the exploration of three central relationships in the play, Shylock and Jessica; Antonio and Bassanio and Bassanio and Portia, I will investigate the presentation of the themes of love and money and also examine how the plot provides a variety of interpretations. The relationship between Bassanio and Portia can be interpreted in different ways. On the surface, their relationship appears to be very pure, seemingly based upon true love. The couple consistently express their love for one another, and we as the audience accept their relationship to be entirely honest and innocent. 'Bassanio: Fair Portia's counterfeit! What demi-God / hath come so near creation?' However, it is possible that Bassanio possessed ulterior motives to marry Portia besides love. Bassanio first describes Portia as 'a lady richly left.' This seems to focus on her wealth, rather than her beauty. Furthermore, Bassanio does not tell Antonio he is in love with Portia; instead he tells Antonio how he feels he will make a huge profit from marrying her. 'I have a mind presages me such thrift.' ...read more.

'What, what, what? Ill luck, ill luck?' 'I thank God, I thank God. Is it true? It can be argued that Shylock 'thanks God' because of his love for honour and justice. However, it this were the case, surely Shylock would be satisfied with a full repayment from Antonio, rather than enthusing about the prospect of taking Antonio's flesh. Maybe Shylock sees Antonio's ill luck as a form of Godly moral justice; that has been granted after Antonio 'spat on my Jewish Gaberdine' and after severe ridicule from Salarino and Solanio. In the end, it is ironic that Shylock is thankful for Antonio's misfortune. After all, it is this ill luck that leads to Shylock losing his faith and proves his ultimate undoing. In truth, Shylock is an ambiguous character, whose actions are not consistent enough to warrant a definite opinion regarding his attitudes to love and money. Similarly, Jessica does not conform to the frequently adopted opinion of her character. In general, the audience view Jessica as the righteous beauty who rises up against her tyrannical father by eloping with her Christian partner. However this is not entirely the case. ...read more.

'I would not be ambitious in my wish/ To wish myself much better, yet for you/ I would be trebled twenty times myself,/...only to stand high in your account' (Portia provides another indication as to her obsession with money through her language here: 'account' 'trebled twenty times') If Portia had not cheated with her song, it seems likely Bassanio would follow his monetary instincts by choosing either the gold or silver casket. This restores faith in Portia's father's system, and restores optimism in the audience, who are again led to believe that a relationship need not require money as an incentive. 'The Merchant of Venice' provides varying interpretations of the issues of love and money. Shakespeare creates a superficial view of characters in the play, whilst aspects of their real personality often remain hidden. I believe that whilst Shakespeare provides a web of contradictions and contrasting attitudes in his subplots, his fundamental view of love and money is made clear through the dominant 'flesh-bond' tale, and his depictions of Antonio and Shylock. It is they who embody Shakespeare's residing opinion upon love and money, through their failed quest to find happiness despite their wealth. 1498 words ?? ?? ?? ?? ...read more.