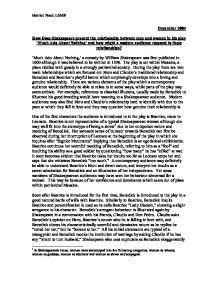 How Does Shakespeare present the relationship between men and women in his play 'Much Ado About Nothing' and how might a modern audience respond to these relationships?

December 2004 How Does Shakespeare present the relationship between men and women in his play 'Much Ado About Nothing' and how might a modern audience respond to these relationships? 'Much Ado About Nothing,' a comedy by William Shakespeare was first published in 1600 although it was believed to be written in 1598. The play is set within Messina, a place riddled with gossip in a strongly patriarchal society. During the play there are two main relationships which are focused on: Hero and Claudio's traditional relationship and Benedick and Beatrice's playful banter which surprisingly develops into a loving and genuine relationship. There are various elements of the play which a contemporary audience would definitely be able to relate to in some ways, while parts of the play may seem archaic. For example, references to classical illusions, usually made by Benedick to illustrate his good breeding would have meaning to a Shakespearean audience. Modern audiences may also find Hero and Claudio's relationship hard to identify with due to the pace at which they fall in love and they may question how genuine their relationship is. ...read more.

When Benedick refuses, Beatrice wishes that she was "a man" so she could kill him herself illustrating the patriarchal nature of Shakespearean times. After persuasion, Benedick does agree to "challenge" Claudio which ends the scene powerfully and shows how the female concept of justice has taken over the men's masculine feelings. Overall, a contemporary audience may find Beatrice's request to "kill Claudio" extreme. Despite this they may admire Beatrice's honesty and enjoy watching Benedick and Beatrice's banter evolve into a loving, honest and genuine relationship that would not appear out of place today. In contrast to Benedick and Beatrice's modern and unorthodox relationship, Shakespearean audiences may find Hero and Claudio's conventional and traditional relationship easier to identify with and understand. Claudio's admiration for Hero first becomes obvious when, after seeing her once, he decides she is the "sweetest lady that" he ever "looked on," although the fact that he inquires "hath Leonato any son," may also raise the question as to whether he's a mercenary to a contemporary audience. Claudio then goes on to talk of how he would like Hero to be his "wife" before he has even talked to her and found out what her personality is like. ...read more.

Contemporary audiences on the whole may find Beatrice and Benedick easier to relate to due to the naturalness of their relationship whilst Shakespearean audiences may have found Hero and Claudio's relationship normal and respectable. Benedick's description of an ideal woman being "fair," "wise," "virtuous," and "mild," sums up what is expected of a stereotypical Shakespearean woman and along with Hero's savage denunciation shows Shakespeare illustrating the patriarchal society of his times as well as showing how marriages were not necessarily based on love but instead family appearances or money. Modern audiences may also disagree with Hero's decision to take Claudio back after he treats her so badly as in the play he offers no apology and has already agreed to marry somebody else showing his insensitive nature and disregard for her feelings. Shakespearean audiences would have been likely not to even question this and if anything would have found Beatrice and Benedick's unconventional relationship to be abnormal. In my opinion, Shakespeare presents both relationships effectively although I find Hero's acceptance of Claudio's behaviour shocking and find Benedick and Beatrice's relationship to be a lot more endearing. 1 In Shakespearean times, women were stereotyped into the following categories: women as whores, women as goddess, women as adulterer and women as shrew and scapegoat. 2 The name Hero means faithfulness in love. Harriet Nash L6MF ...read more.