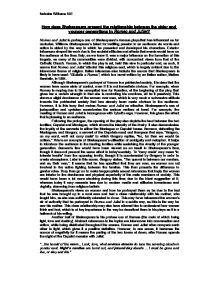 How does Shakespeare present the relationship between the older and younger generations in Romeo and Juliet?

How does Shakespeare present the relationship between the older and younger generations in Romeo and Juliet? Romeo and Juliet is perhaps one of Shakespeare's famous plays that has influenced us for centuries. Williams Shakespeare's talent for instilling passion in an audience via words and action is aided by the way in which he presented and developed his characters. Exterior influences shaped his work due to the societal attitudes and effects that events would have on the audience at the time. Italy, as we know it, was a major influence on the formation of this tragedy, as many of its communities were divided, with concordant views from that of the Catholic Church. Verona, in which the play is set, held this view in particular and, as such, it seems that Romeo and Juliet 'attacks' this religious sect, which is largely evident due to the interwoven theme of religion. Italian influences also include the source that Shakespeare is likely to have used: "Giulietta e Romeo", which is a novel written by an Italian author, Matteo Bandello, in 1554. Although Shakespeare's portrayal of Verona is a patriarchal society, it is clear that the women have some state of control, even if it is not immediate obvious. For example, when Romeo is moping due to his unrequited love for Rosaline, at the beginning of the play, that gives her a certain strength in that she is controlling his emotions, all be it passively. ...read more.

He seems to be in control during the scenes in which he is featured, however, on closer analysis it is clear that perhaps he is insecure about losing this power. He exerts himself as though he is being challenged when Tybalt spots Romeo at the Capulet party. Surely if he is in charge then he can deal with his nephew while remaining calm? He only has a daughter, so maybe it is possible that he is concerned about whom his successor (as head of the Capulet family) will be. If it most likely to be Tybalt then Lord Capulet is teaching him how to control his emotions in the party scene. Depending on his mood, Lord Capulet adjusts his language accordingly. In Act 1 Scene 5, (the Capulet party scene) he appears to be friendly and well-spoken in front of his guests. Though conversely, in Act 3 Scene 5 (when the Lord and Lady propose that Juliet marries Paris) he reveals a callous attitude, especially towards his daughter, and refers to her as "baggage". This emphasises the fact that he sees her as a burden and an inconvenience. He also, as he becomes tenser, uses the imperative voice as an order for her disobedience. He lists a staccato multitude of questions when Lady Capulet reports the news that Juliet is uninterested in the proposal, which is quite a contrast with the extended metaphor he expresses prior to this. ...read more.

Metaphoric props may be utilised onstage in order to represent ulterior factors in the text, such as the loss of hope for Juliet. This may be represented by a veil-like curtain shrouding her window, which would be used to signify the fact that the anticipated marriage to Paris (i.e. the veil) is ruining her happiness and desire (i.e. the clear window) The use of pathetic fallacy would also be appropriate for representing the mood inside the Capulet household especially after Lord Capulet's "stormy" entrance. However, in comparison to his attitude at the party, it becomes obvious that he is very much concerned with the reputation of the Capulet house, more so, at least, than the younger generation e.g. Tybalt, who is intent on attacking Romeo when he becomes aware of his presence at the party. Ironically, due to his purpose of avoiding trouble, Lord Capulet is, in fact controlling his daughter's fate, as she is meeting Romeo while the Lord bickers with Tybalt! Lighting could be used to represent the mood of the characters and help the audience visualise the contrast between these two events that are significant in the development of the play. In conclusion, I feel that the use of contrast and irony aids the effect of the events that unravel in this Shakespearean piece. The generational separation shows a parallel to some of the issues in contemporary society, though in a differing senses, which helps it to appeal to a modern audience, despite some factors, which would endear it more to the audience Shakespeare designed it for. ?? ?? ?? ?? Natasha Williams 10E ...read more.