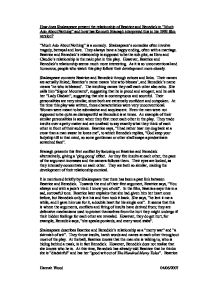 How does Shakespeare present the relationship of Beatrice and Benedick in &quot;Much Ado About Nothing&quot; and how has Kenneth Branagh interpreted this in his 1993 film version?

How does Shakespeare present the relationship of Beatrice and Benedick in "Much Ado About Nothing" and how has Kenneth Branagh interpreted this in his 1993 film version? "Much Ado About Nothing" is a comedy. Shakespeare's comedies often involve tragedy, betrayal and love. They always have a happy ending, often with a marriage. Beatrice and Benedick's relationship is supposed to be the sub-plot, as Hero and Claudio's relationship is the main plot in this play. However, Beatrice and Benedick's relationship seems much more interesting. As it is so unconventional and humorous, people who watch this play follow their development more closely. Shakespeare connects Beatrice and Benedick through echoes and links. Their names are actually linked; Beatrice's name means 'she who blesses', and Benedick's name means 'he who is blessed'. The insulting names they call each other also echo. She calls him "Signor Mountanto", suggesting that he is proud and arrogant, and he calls her "Lady Disdain", suggesting that she is contemptuous and scornful. Their personalities are very similar, since both are extremely confident and outspoken. At the time this play was written, these characteristics were very unconventional. ...read more.

The audience find unconventional characters so much more interesting because they are different from everyone else. The fact that Beatrice and Benedick have different views in comparison to everyone else's just suggests further that they should be together. Shakespeare fluctuates the control in the relationship between Beatrice and Benedick. At the ball, Beatrice has the upper hand because she knows that the man behind the mask is Benedick. She now has complete control and can say whatever she likes about him because he will not reveal himself. She calls him the "prince's jester" and a "very dull fool". However, later on, Benedick offers to travel extreme distances just to get away from Beatrice, who he calls a "harpy" in front of a lot of people. He now has the control because he has the power to humiliate her in public with his ridiculous and hyperbolic statements. Shakespeare fluctuates who has the control because he wants to make them appear equal and the same. The relationship between Beatrice and Benedick is presented by Shakespeare as something the others can be amused by. In Branagh's film, the director makes the audience laugh and cheer at them whenever one of them throws an insult. ...read more.

As soon as Beatrice says, "Kill Claudio", the music stops to emphasise the words. Beatrice paces, throwing furniture and making extreme gestures with her hands. She shouts with frustration and Benedick has to restrain her at various points. However, at the end of the play, Shakespeare shows how the love between Beatrice and Benedick is fully restored. They only agree to marry each other backhandedly, after making excuses, like for "pity" or "to save your [Benedick's] life". In the Branagh film, there are cheers and applause from the crowd when Benedick kisses Beatrice. This happy ending is complete and ends with a marriage, a common feature in Shakespeare's comedies. It is a satisfying ending for the audience, as Beatrice and Benedick are finally together. The future for Beatrice and Benedick seems like a 'happily ever after' ending. They agree that they are "too wise to woo peaceably", and from there, it is presumed that they will move on with a loving relationship. In Branagh's version, positive music begins at the end of the film. There is a repetitive melody, possibly suggesting that Beatrice and Benedick's relationship is ongoing and for eternity. All the characters then begin to dance in circles, maybe representing eternity, wedding rings and therefore, marriage. These themes echo the themes of the play. Hannah Wood 04/06/2007 ...read more.