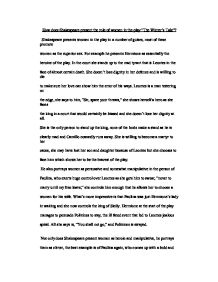 How does Shakespeare present the role of women in the play &quot;The Winter's Tale&quot;

How does Shakespeare present the role of women in the play "The Winter's Tale"? Shakespeare presents women in the play in a number of guises, most of these promote women as the superior sex. For example he presents Hermione as essentially the heroine of the play. In the court she stands up to the mad tyrant that is Leontes in the face of almost certain death. She doesn't lose dignity in her defence and is willing to die to make sure her love can show him the error of his ways. Leontes is a man teetering on the edge, she says to him, "Sir, spare your threats," she shows herself a hero as she faces the king in a court that would certainly be biased and she doesn't lose her dignity at all. She is the only person to stand up the king, none of the lords make a stand as he is clearly mad and Camillo cowardly runs away. She is willing to become a martyr to her cause, she may have lost her son and daughter because of Leontes but she chooses to face him which shows her to be the bravest of the play. He also portrays women as persuasive and somewhat manipulative in the person of Paulina, who exerts huge control over Leontes as she gets him to swear, "never to marry until my free leave," she controls him enough that he allows her to choose a women for his wife. ...read more.

She also controls the king which means she essentially controls the country. Hermione's role is key, she played a hero's last stand during the trial where she became a martyr. She is a figurehead of the novel. The heroine of the play for the strength and bravery she has shown. Perdita's role is also key in the play, a number of events would have not occurred without her being there such as the uniting of the two kingdoms again. Shakespeare presents the role of women as contrasting with that of men, the role that women play are the heroes of the play, such as Hermione's last stand against Leontes, while Camillo has run off and taken a cowards way out to avoid death unlike Hermione. Men are portrayed as cowards and jealous tyrants, like Leontes' jealousy that came from no where, it has no logical reasoning whereas Perdita is perceived as having a lot of common sense, and it's this trait that stops her from being one dimensional. Polixines also portrays this illogical madness, for example the party where Perdita is host and he finds out his son's intentions to wed a commoner, he looses control. He says, "I'll have that beauty scratched with briers," Shakespeare is making out that men do things that make no sense while women think things through in their head. ...read more.

The role of women in the play is also a message, it is very pro women so it's a memorial to Elizabeth, the first female monarch, which means it's also very anti King James as it portrays the male kings as not as strong as women, it is comparing James to Elizabeth. It is an attack on the new monarchy which it appears Shakespeare dislikes. It shows women as political players which were unheard of in that time, Shakespeare is promoting women's rights which was very unusual in a time of female suppression, he expresses his view that women are equal to men, and in some ways superior. The men in the play are portrayed as people who don't think with their heads, and act as jealous tyrants, expressing that maybe James is jealous of Elizabeth's success. I also think that all the women in the play represent quality of Elizabeth's, Paulina's cunningness and intelligence, Hermione's bravery. In conclusion the role of women in "The Winter's Tale" is an important part of the book as it expresses some key ideas of Shakespeare's and the period. The role of women is however shown to be more important than that of males throughout the king and they outclass kings in their superiority. The play is however a political statement. ?? ?? ?? ?? ...read more.