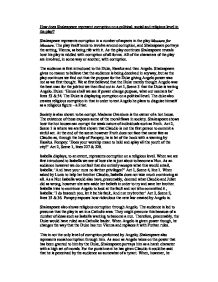 How does Shakespeare represent corruption on a political, social and religious level in the play?

How does Shakespeare represent corruption on a political, social and religious level in the play? Shakespeare represents corruption in a number of aspects in the play Measure for Measure. The play itself tends to revolve around corruption, and Shakespeare portrays the setting, Vienna, as being rife with it. As the play continues Shakespeare reveals how his play is riddled with corruption of all forms. All of the characters of the play are involved, in some way or another, with corruption. The audience is first introduced to the Duke, Escalus and then Angelo. Shakespeare gives no reason to believe that the audience is being deceived in anyway, but as the play continues we find out that the purpose for the Duke giving Angelo power was not as we first thought. We at first believed that the Duke merely thought Angelo was the best man for the job but we then find out in Act 1, Scene 3 that the Duke is testing Angelo. ...read more.

As a Nun Isabella would also have, presumably, deemed what Claudio and Juliet did as wrong, however she sets aside her beliefs in order to try and save her brother. Isabella tries to convince Angelo to look at the fault and not who committed it , Isabella: 'I do beseech you, let it be his fault, And not my brother' Act 2, Scene 2, lines 35 & 36. Pompey exposes how ridiculous the new law created by Angelo is. Shakespeare also shows religious corruption through Angelo. The audience is led to presume that the play is set in a Catholic area. They might presume this because of a number of ideas such as Isabella wanting to become a nun. Therefore, presumably, the Duke would have ruled as a Catholic leader. When Angelo is given power though, he changes the way that the Duke has run Vienna and replaces it with Puritan rules. ...read more.

Corruption is a big part of the play Measure for Measure and as a result all of the characters in the play are involved, in some way, with corruption. Shakespeare has entwined it into all of their lives. This corruption is a social, religious or political level, and for some of the characters more than just one of them. We are immediately introduced to corruption and Shakespeare continues to expose it at the plot goes on. The main corruption of the play is that on of a social level and is committed by Claudio. As the characters discuss this more corruption is revealed, for example that of Froth and Mistress Overdone and as Isabella tries to eradicate the punishment further corruption is revealed, on both a social and religious scale. Shakespeare links the corruption to the theme of the play and either represents is as a tragedy or as comical. The events, as they go on, seem to create other causes for corruption and the audience are led to wonder what will happen next. ...read more.