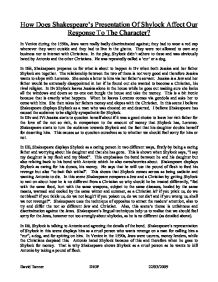 How Does Shakespeare's Presentation Of Shylock Affect Our Response To The Character?

How Does Shakespeare's Presentation Of Shylock Affect Our Response To The Character? In Venice during the 1590s, Jews were really badly discriminated against; they had to wear a red cap whenever they went outside and they had to live in the ghetto. They were not allowed to own any business nor to interact with Christians. In the play, Shylock didn't adhere to these and was obviously hated by Antonio and the other Christians. He was repeatedly called a 'cur' or a dog. In IIiii, Shakespeare prepares us for what is about to happen in IIv when both Jessica and her father Shylock are together. The relationship between the two of them is not very good and therefore Jessica wants to elope with Lorenzo. She sends a letter to him via her father's servant. Jessica is a Jew and her father would be extremely disappointed in her if he found out she wanted to become a Christian, his rival religion. In IIv Shylock leaves Jessica alone in the house while he goes out making sure she locks all the windows and doors so no-one can burgle the house and take the money. ...read more.

so why should he be treated differently, "fed with the same food, hurt with the same weapons, subject to the same diseases, healed by the same means, warmed and cooled by the same winter and summer, as a Christian is? if you prick us, do we not bleed? if you tickle us, do we not laugh? if you poison us, do we not die? and if you wrong us, shall we not revenge?". Shakespeare uses the technique of opposites to attract the readers' attention, also to try and differ the not so different Jew and Christian. Also, this scene's theme is unfairness and discrimination against the Jews. Shakespeare's lingual techniques help us to realise that we should feel sorry for the Jews, however not too strongly about shylocks, as he is no different (as detailed above). In Iiii, Shylock is talking to Antonio and agreeing the details of the bond. Shakespeare's representation of Shylock in this scene displays him as a cruel person who wants revenge on a man for calling him a "cur", a dog, and for spitting on him. ...read more.

He says "Why he cannot abide a gaping pig; Why he, a harmless necessary cat; Why he, a woolen bagpipe; but of force". The repetition of why at the beginning of each line, gives us the impression that shylock is questioning the Duke, as if he has no respect for hierarchy. Also, he repeats six and ducats, "If every ducat in six thousand ducats were in six parts, and every part a ducat". This repetition emphasizes the bond and that he would rather flesh than money, a villain in this case. In conclusion, I think Shakespeare's presentation of shylock affects our response about him because of one main reason, whether he is the victim or the villain. This causes us to question ourselves as to whether we should feel sorry for shylock because he has lost everything including his friends, money, daughter, servant and religion. However, should we feel merciless against him because he wanted to take the life of a Christian all because he was mistreated? All of these points have made me come to the decision that Shakespeare's lingual techniques have made the presentation of shylock a mixed character. ?? ?? ?? ?? David Tanner D10F 22/03/2009 ...read more.