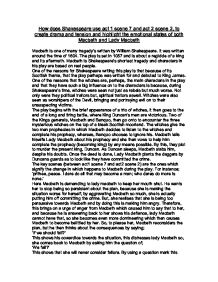 How does Shakespeare use act 1 scene 7 and act 2 scene 2, to create drama and tension and highlight the emotional states of both Macbeth and Lady Macbeth

How does Shakespeare use act 1 scene 7 and act 2 scene 2, to create drama and tension and highlight the emotional states of both Macbeth and Lady Macbeth Macbeth is one of many tragedy's written by William Shakespeare. It was written around the time of 1604. The play is set in 1057 and is about a regicide of a king and its aftermath. Macbeth is Shakespeare's shortest tragedy and characters in his play are based on real people. One of the reasons for Shakespeare writing this play is that because of its Scottish theme, that the play perhaps was written for and debuted to King James. One of the reasons that the witches are, perhaps, the main characters in the play and that they have such a big influence on to the characters is because, during Shakespeare's time, witches were seen not just as rebels but much worse. Not only were they political traitors but, spiritual traitors aswell. Witches were also seen as worshipers of the Devil, bringing and portraying evil on to their unsuspecting victims. The play begins with the brief appearance of a trio of witches, it then goes to the end of a long and tiring battle, where King Duncan's men are victorious. Two of the Kings generals, Macbeth and Banquo, then go onto to encounter the three mysterious witches on the top of a bleak Scottish moorland. The witches give the two men prophecies in which Macbeth decides to listen to the witches and complete his prophecy, whereas, Banquo chooses to ignore his. Macbeth tells hiswife Lady Macbeth about his prophecy and she then vows to help him complete the prophecy (becoming king) ...read more.

I believe that this comment is one of the coldest and cruellest lines that she says in the play. This is because, it shows that really all she cares about is her own self accomplishment, she is so obsessed about gaining a higher title that she doesn't care about Macbeth, she is just using him to achieve this. But controversially, without him, she would not be able to achieve any of this, so, initially she needs him. Without him she would be weak and pathetic. In act 1 scene 7, Lady Macbeth try's to persuade Macbeth to believe in her, to trust her disposition. To try and persuade him into agreeing to commit the murder, instead of being encouraging and being kind in her manner towards him she is, threatening, hurtful and cruel towards him. By doing this she says to him, 'What beast wasn't then that made you break this enterprise to me?' What she is saying to Macbeth is that it is ironic that he has gone against her, his next of kin. But instead, sided with his king. But she quickly changes her tone and says, 'When you durst do it, then you were a man' She says to him, that when he commit's the crime, then it will show that he is a real man, that he has great power- by killing the king it will show he is the most powerful man in the country. Also for her to use the word when is clever because, she uses a definite word she is clearly stating that he will commit the murder and that he will be respected as a true man for it. ...read more.

your hand' Lady Macbeth also tells Macbeth to go and take the daggers back to the room and to make sure that he smears the blood over the Duncans guards to make it look even more obvious that his guards murdered him. But because of how disturbed Macbeth is he is very clear that he will not go back to that room where his king lies dead, by his doing. 'I'll go no more. I am afraid to think what I have done; look on't again, I dare not' In my opinion the best dramatic device Shakespeare has used for this play is the contrast between the roles of Macbeth and lady Macbeth. The dramatic difference between to two characters personalities and behaviour is clearly shown to us. Macbeths noble and bravery is clearly displayed when he is given the title thane of cawdor due to his commitment in battle, whilst lady Macbeths evil and thirst for power is obviously demonstrated due to the fact that she uses her own husband to murder their own king. He also shows the two characters as maybe 'role reversals' due to the fact that lady Macbeth is the strong, clever, dominant character, whilst Macbeth is the loyal, kinder, softer character. But, the reasons why Macbeths personality changes so much is the fact that after the murder of Duncan the witches carry on to play with Macbeths mind, to make him want more and that's the reason of his downfall. He wanted too much of what he couldn't have. This was the same reason for lady Macbeth, but I believe that from the start she always wanted to have more and more because of her greed for power. ...read more.