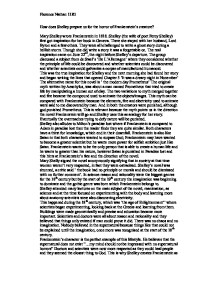 How does Shelley prepare us for the horror of Frankenstein's creature?

How does Shelley prepare us for the horror of Frankenstein's creature? Mary Shelley wrote Frankenstein in 1818. Shelley (the wife of poet Percy Shelley) first got inspiration for her book in Geneva. There she stayed with her husband, Lord Byron and a few others. They were all challenged to write a ghost story during a hellish storm. Though she did write a story it was a forgettable on. The real inspiration came on June 22nd, the night before Shelley's departure. The group discussed a subject from de Stael's 'De L'Allemagne' where they considered whether the principle of life could be discovered and whether scientists could be discovered and whether scientists could galvanize a corpse of manufactured humanoid. This was the true inspiration for Shelley and the next morning she had found her story and began writing the lines that opened Chapter 5 'It was a dreary night in November' The alternative name for this novel is ' the modern day Prometheus' The original myth written by Aeschylus, was about a man named Prometheus that tried to create life by manipulating a human out of clay. The two variations to myth merged together and fire became the compound used to animate the objects/images. This myth can be compared with Frankenstein because the elements, fire and electricity used to animate were said to me discovered by man. And in both the creators were punished, although god punished Prometheus. ...read more.

His arrogance and lack of morality can also be seen. "...My ability to give life to an animal as complex and wonderful as man' as he thinks he has the ability to make a life, without a woman, like god which is blasphemous and the impact on the reader especially at the time it was written would be one of shock. Frankenstein is attempting to create life and as a result will be cast into damnation because he is going against God like Satan in paradise lost. Frankenstein is also selfish as the only thought he has about his creature is "...its im-practability..." He goes on to say "It was with these feelings that I began the creation of a human being" As Frankenstein is telling the story himself we know that he regrets what he has done. There is no mention of him considering the consequences of his plight and throughout chapter 4 the foreboding references continue and prepare the reader for the next chapter, where Frankenstein's creature is finally brought to life. Frankenstein's ambition consumes him so much he forgets about morals. The readers will notice this flaw in character and fear the worst. However this is not the only flaw in his character. He appears to contradict himself and all that he believes in. He thinks that he is the clear thinking emotionally detached scientist, yet it is his passion to achieve and his 'ardour' that are causing him to lose sight of what he is doing. ...read more.

They go back to his apartment. As he finds that the 'spectre' has left he is elated and feels like he has no more responsibility for his creature "...my bedroom was also free from it's hideous guest" We know that Frankenstein describes the creature as his enemy "I became assured that my enemy had indeed fled" I clapped my hands for joy" Which can also be seen when the creature reaches out to him He describes it as "...he muttered some inarticulate sounds while a grin wrinkled his cheeks...one hand stretched out seemingly to detain me" believing that it is threatening him. He misreads its actions but the reader can see that the creature is just reaching out like an innocent newborn child. In the latter parts of Chapter 5 Frankenstein is hit by a nervous fever and his friend nurses him back to health. When comparing Frankenstein with his creature we see there is a direct contrast between them. Frankenstein has family back home to care and love him, he also has his friend to nurse him back to health. His creature however is abandoned knowing nothing and having no one to care for him. Shelley uses religious imagery to help prepare the reader for the horror. Knowing that Frankenstein is going against God tells the reader that he will eventually come to his doom. The flaws in Frankenstein's character tell the reader that his creature will also be imperfect. Dark imagery prepares the reader for the rebirth of Frankenstein's creature, and techniques like alliteration help us to view the creature through Frankenstein's eyes. Florence Nathan 11R1 ...read more.