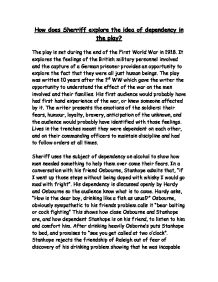 How does Sherriff explore the idea of dependency in the play, journey's end?

How does Sherriff explore the idea of dependency in the play? The play is set during the end of the First World War in 1918. It explores the feelings of the British military personnel involved and the capture of a German prisoner provides an opportunity to explore the fact that they were all just human beings. The play was written 10 years after the 1st WW which gave the writer the opportunity to understand the effect of the war on the men involved and their families. His first audience would probably have had first hand experience of the war, or knew someone affected by it. The writer presents the emotions of the soldiers: their fears, humour, loyalty, bravery, anticipation of the unknown, and the audience would probably have identified with those feelings. Lives in the trenches meant they were dependent on each other, and on their commanding officers to maintain discipline and had to follow orders at all times. Sheriff uses the subject of dependency on alcohol to show how men needed something to help them over come their fears. ...read more.

he's never had a rest ... young Stanhope goes on sticking it month in month out". Osborne explains Stanhope's situation when he says, "because he's stuck it till his nerves have got battered to bits, he's called a drunkard." Raleigh is a young new officer who just entered the war. He entered the war on the basis that he would get to follow in his hero's footsteps. He talks a lot about knowing Stanhope before the war and their friendship, saying "we were terrific pals". Raleigh isn't to bothered about the war, as he just came out of school, like Stanhope, he is still young, excited and naive about the prospects of participating in the war and fighting for his country, not caring about the problems war can cause. He says things such as "how frightfully quiet it is" thus showing the idea he has of war. When Raleigh first gets there he depends on Stanhope for support and encouragement, when he realises Stanhope cannot provide these things he turns to Osborne who can provide these things. ...read more.

He shows his serious side when after all the joking he sys, "it's damn ridiculous making a raid when the Bosche are expecting it". When he says this it shows he resents the stupid decisions being made by the commanding officers and it indicates that he is more experienced then them. Osbourne depends on his little comforts such as books, memory's and other things to get him through life in the trenches. He comes across to the audience as a friendly old man trying to get through life, and helping others along the way. He takes the role of "uncle" because he is the oldest and a lot of the troops look to him as a father like figure, comforting them in their times of need. He depends on the people around him to depend on him, so that he has a purpose and he receives their affection. Through out the play the theme of dependency is used to show how real trench life would have been like. Every character in this play has been affected some way or another by the war and has had to depend on some one with something. ...read more.