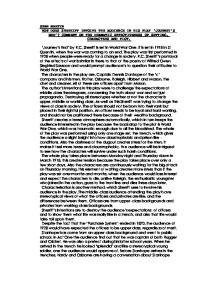 How does Sherriff involve the audience in his play 'Journey's end'? Comment on the dramatic effectiveness of setting, characters and plot.

SEAN MARTIN HOW DOES SHERRIFF INVOLVE THE AUDIENCE IN HIS PLAY 'JOURNEY'S END'? COMMENT ON THE DRAMATIC EFFECTIVENESS OF SETTING, CHARACTERS AND PLOT. 'Journey's End' by R.C. Sherriff is set in World War One. It is set in 1918 in St Quentin, when the war was coming to an end. The play was first performed in 1928 when people were ready for a change in society. R.C. Sherriff's portrayal of the effects of war is similar in there to that of the poetry of Wilfred Owen Siegfried Sassoon and would prompt audience's to question their attitudes to World War One. The characters in the play are, Captain Dennis Stanhope of the 'c' company and his men, Trotter, Osborne, Raleigh, Hibbert and Mason, the chef and cleaner. All of these are officers apart from Mason. The author's intentions in this play were to challenge the expectations of middle-class theatregoers, concerning the truth about war and not just propaganda. Destroying all stereotypes whether or not the character is upper, middle or working class. As well as this Sherriff was trying to change the views of class in society. The officers should not be born into their rank but placed in their rightful position. An officer needs to be loyal and hard working, and should not be positioned there because of their wealthy background. Sherriff creates a tense atmosphere automatically, which in turn keeps the audience interested in the play because the backdrop to the plot is World War One, which was traumatic enough due to all the bloodshed. ...read more.

Osborne in this case is the stereotypical officer. His loyalty is shown when he is supporting Stanhope, when Hardy complains about Stanhope's drink problem. His stability is shown when the sergeant major selects him for the raid, he shows signs of fear, as any man would but is confident about his return because he leaves with his pipe alight, as though he expected to return within minutes. The other men look up to Osborne being the oldest of the officers, by twenty years or so, when they need reassurance or advice Osborne is the man they all turn to, he is extremely avuncular. For instance Stanhope asks if he is going 'Potty?' And Osborne replies with a powerful 'Oh, lord, no!' Osborne may seem to be the stereotypical upper-class officer, but he shows signs of being unconvinced about the war and its aim. The audience receives this information when Osborne is in conversation with Raleigh, they together agreed on how pointless the war actually was. This would shock the audience, destroying all stereotypical thoughts Sherriff had previously given out. The audience would be very interested now to find out the final thoughts of all the officers. Due to Osborne being a public school master, he has a more intellectual knowledge of words and their meanings than the working-class men and officer Trotter. Even in a child's book, the words from Alice's Adventures In Wonderland touch Osborne emotionally, whereas Trotter cannot 'See the point' Because he is from a lower-class background, Sherriff has kept the stereotype with the officers literacy, this would keep the audiences stereotypical views are still slightly alive. ...read more.

His public school years are proven by, using such language as 'Righto' and 'cheero' Unfortunately Osborne dies during the raid, Raleigh does not take this without difficulty and shows his need of experience by eating with the privates. Despite Sherriff destroying the officers stereotypes, Raleigh remains unchanged throughout the play, his enthusiasm is even shown on his death bed when he claims that his injury is simply a reoccurring tennis injury, rather than face facts that he has been hit in the back by shrapnel. He is so determined and loyal to his country that he uses every last ounce of strength to get back to the battle. This is because he believes in his king and country, and that he will be crowned a hero upon returning home. In this play he represents the young enthusiastic men who died without knowing the truth about how horrible the world would be to him. Audience involvement occurs in a variety of ways the idea of the men being cooped up in a small dark and damp trench is given to the audience on several occasions, especially during the first Act. Audience's stereotypes were changed throughout the play, all for the better and none for the worst. Trotter came in a lower-class officer but came out on top of the other upper-class officers. Numerous members of the audience would now question the officers within the army and also how they are selected. Therefore Sherriff has achieved his intentions, to put the public's minds on the right track about war. Positively I can say that R.C Sherriff succeeded in proving his point that the army is corrupt and that not everyone deserves what they are given. ...read more.