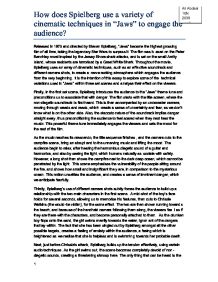 How does Spielberg use a variety of cinematic techniques in Jaws to engage the audience?

How does Spielberg use a variety of cinematic techniques in "Jaws" to engage the audience? Released in 1975 and directed by Steven Spielberg, "Jaws" became the highest grossing film of all time, taking the legendary Star Wars to surpass it. The film was based on the Peter Benchley novel inspired by the Jersey Shore shark attacks, and is set on the small Amity Island, whose residents are terrorised by a Great White Shark. Throughout the movie, Spielberg uses an array of cinematic techniques, such as an effective soundtrack and different camera shots, to create a nerve racking atmosphere which engages the audience from the very beginning. It is the intention of this essay to explore some of the technical variations used in "Jaws" within three set scenes and analyse their effect on the viewers. Firstly, in the first set scene, Spielberg introduces the audience to the "Jaws" theme tune and preconditions us to associate that with danger. The film starts with the title screen, where the non-diegetic soundtrack is first heard. This is then accompanied by an underwater camera, moving through weeds and reeds, which create a sense of uncertainty and fear, as we don't know what is on the other side. ...read more.

It also allows the audience to familiarise themselves with Alex's features, which adds potency to the tragedy of his death. Finally, the shot focuses on three particular characters so from then on; we are tracking their every moment, knowing that they are significant in some way. Secondly, as the audience are anticipating an attack, Brody's view is continuously impaired by insignificant characters walking into his line of sight. These visual wipes go across the screen in alternating directions, each time revealing a closer image of Brody's face, or random people in the water - multiple targets for the shark. These are very effective in building up tension, as we see Brody as being the only defence against a possible attack. As he becomes nervous and frustrated, so do the audience. The suspense in the scene is added to even more by an array of red herrings, which are shown hand in hand with the wipes. For example, Brody can see a small dark shape approaching someone in the water, moving as if it were a shark's fin. Brody makes to get out of his chair, and the audience get excited and unnerved, only to relax again as we realise that it's just another swimmer with a black cap. ...read more.

Arguably the best scene in the film, Spielberg's clever use of a simplistic set and the right sounds made the Indianapolis Speech even more engaging than it already was. As a general point, throughout the film, Spielberg makes the audience sub-consciously associate the colour yellow with impending doom. This technique is used to stimulate the build up of tension, as a more menacing atmosphere is created by other effects such as the "Jaws" theme tune. The audience are already waiting in anticipation for the attack that they know is coming and the visual motif ensures the full engagement of the viewers during the build up to a dramatic climax. Steven Spielberg's plethora of cinematic techniques has turned "Jaws" into the timeless classic that it is today. This essay has explored and analysed the different technical elements within the film, such as the different camera shots, the positioning of the characters and the infamous "Jaws" theme tune, which audiences worldwide have come to know and love. Along with many other aspects of cinematography and sound, Spielberg has transformed a simple plot into an inspirational creation that has captivated millions across the globe. ?? ?? ?? ?? 1 ...read more.

This is an excellently executed analysis that is well structured and effectively communicated. The scenes are analysed in depth and all of the director's important decisions are considered and explained.