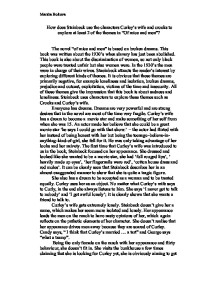 How does Stainbeck use the characters Curley's wife and crooks to explore at least 2 of the themes in &quot;Of mice and men&quot;?

How does Stainbeck use the characters Curley's wife and crooks to explore at least 2 of the themes in "Of mice and men"? The novel "of mice and men" is based on broken dreams. This book was written about the 1930's when slavery has just been abolished. This book is also about the discrimination of women, so not only black people were treated unfair but also women were. In the 1930's the men were in charge of their wives. Staeinbeck attracts the reader's interest by exploring different kinds of themes. It is obvious that these themes are primarily negative, for example loneliness and isolation, broken dreams, prejudice and outcast, exploitation, victims of the time and insecurity. All of these themes give the impression that this book is about sadness and loneliness. Steinbeck uses characters to explore these themes such as Crooks and Curley's wife. Everyone has dreams. Dreams are very powerful and are strong desires that in the novel are most of the time very fragile. Curley's wife has a dream to become a movie star and make something of her self from when she was 15. An actor made her believe that she could be a great movie star 'he says I could go with that show.' ...read more.

But the reader still feels sorry for Lennie because of his disability to understand. It is sad that Curley's wife doesn't understand that people don't get involved with her because of her behaviour and appearance. Her dreams seem to be unachievable and unrealistic making her lonelier and tragic. Crooks has a dream to be treated equally. He is the only black person on the ranch so he doesn't get any respect because in the 1930s a lot of people were racist, it was only ten years since slavery had been abolished. People used the term "nigger" about Crooks naturally; they don't think that it is offensive to Crooks because they were socialized to treat black men as slaves. Steinbeck makes it clear to the reader that Crooks isn't treated equally by mentioning that Crooks cant go into the bunkhouse. Instead he has his own harvest room with unsuitable furniture to use, "Crooks' bunk was a long box filled with straw, on which his blankets were flung" it sounds more like something an animal would sleep on rather than a person which gives the impression that Crooks is seen as an animal rather than a person. ...read more.

Interestingly Steinbeck decided to put Crooks and Curley's wife together in the middle of chapter 4, when Lennie and Candy are talking in Crooks' room. Curley's wife then came in unwontedly so Candy told her that she isn't wanted. However she doesn't listen to him so Crooks told her to get out. - This shows that Crooks felt like he had more power and equality than usual since Candy and Lennie were treating him equally at that time which is why he had enough courage to tell Curley's wife to get out. Curley's wife then starts threatening Crooks. This suggests that although Crooks and Curley's wife are both treated unequally, Curley's wife still has the control of Crooks meaning that Curley's wife has a very racist opinion of Crooks. This also implies that Curley's wife fells that she has a chance to take an advantage of Crooks since she's always being taken advantage of. Steinbeck created Curley's wife character to have a bitter, lonely and isolated life while creating Crooks' character to be treated horribly, unequally and have a lonely and isolated life where he has to listen to everything anyone orders him. Steinbeck has used these characters to explore these themes openly making this novel very effective and powerful book to read. ?? ?? ?? ?? Marsha Boltova ...read more.

Some good linking of characters through themes and the ways they are presented. At times there are opportunities to use further references from the text and in particular the linking of points through structure needs to be explored in more detail.