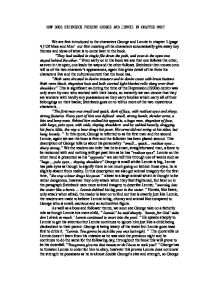 how does steinbeck present george and lennie in chapter 1

HOW DOES STEINBECK PRESENT GEORGE AND LENNIE IN CHAPTER ONE? We are first introduced to the characters George and Lennie in chapter 1 (page 4.)'Of Mice and Men' our first meeting of the characters automatically give away key themes and ideas of what is to come later in the book. "They had walked in single file down the path, and even in the open one stayed behind the other." Even early on in the book we see that one follows the other, as even in the open, one leads the way and the other follows. Steinbeck then moves onto tell us of the two character's appearances, again this gives detail of the lives the characters live and the cultural context that the book has, "Both were dressed in denim trousers and in denim coats with brass buttons. Both wore black, shapeless hats and both carried tight blanket rolls slung over their shoulders" This is significant as during the time of the Depression (1930s) denim was only worn by men who worked with their hands, so instantly we can denote that they are workers with hardly any possessions as they ...read more.

Lennie on the other hand is presented as his "opposite" we can tell this through use of words such as "huge... pale eyes... sloping shoulders" George is small whilst Lennie is big, Lennie has pale eyes as though to signify there is not much going on behind those eyes, he is slightly absent from reality. In this description we also get animal imagery for the first time, "the way a bear drags his paws." a bear is a large animal which is thought to be rather dangerous, however they only attack when they feel frightened, but later on in the paragraph Steinbeck uses more animal imagery to describe Lennie; "snorting into the water like a horse.... Lennie dabbed his big paw in the water." Horses, like bears, only attack when afraid, the reader is later on to find out that is exactly just like Lennie, the readers are made to believe Lennie is big, clumsy and animal like compared to George who is small, cautious and an authoritive figure. As well as a boss and follower theme, we soon see George take on a fatherly role as though Lennie is a mere child, " Lennie!' ...read more.

We can predict the downfall of the two characters in the book as George tells Lennie "Well, look Lennie-if you jus' happen to get in trouble like you always done before, I want you to come right here an' hide in the brush." He foreshadows that Lennie will get in trouble and should return to the place where they first started. He gives Lennie this command very clearly as Lennie lacks memory and needs instruction. Through the book our main characters are fuelled by their thoughts of their dream, "Someday-we're gonna get the jack together and we're gonna have a little house and a couple of acres an' a cow and some pigs and---" "An' live off the fatta the lan'," Lennie shouted. "An' have rabbits. Go on, George!" George wants a ranch so he can be his own boss and never have to be under anybody or continue to be on the go. Yet again we see Lennie's childlike qualities as he gets excited about rabbits, however real rabbits are only seen once during the book and they run when Lennie and George arrive, this signify their dream will never be more than a dream. ...read more.

A strong response analysing both language and structure. I think the relationship between the two could have been explored in more detail; George's frustration with Lennie which is then quickly juxtaposed with guilt could have been looked at. At times more specific links could be made between this chapter and the rest of the novella.