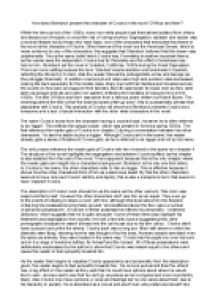 How does Steinbeck present the character of Crooks in the novel 'Of Mice and Men'?

﻿How does Steinbeck present the character of Crooks in the novel 'Of Mice and Men'? Within the time period of the 1930's, many non-white people kept themselves isolated from others and stayed out of trouble, to avoid the risk of being lynched. Segregation, isolation and racism was a normal lifestyle led by those who were black; one of the characters that embodies this theme in the novel is the character of Crooks. Other themes of the novel are the American Dream; which is never achieved by any of the characters, this suggests that Steinbeck believed that the dream was unbelievable. This is the same belief which Crooks has. Friendship is another important theme, as the reader sees the desperation Crooks has for friendship and the affect of loneliness has had on him. Steinbeck set the novel in Soledad, California, 1930's during the Great Depression. This is an ironic setting because the term 'Soledad' means isolation and loneliness in Spanish, reflecting the life led by Crooks. Also the reader follows the protagonists Lennie and George as they struggle financially. In addition unemployment rates were high and pension rates decreased; making life hard especially for the middle class. Many men left their families and travelled across the country to find work and support their families. But life was harder for black men as they were seen as savage animals and were not wanted; reflecting the hardship of coloured men in the 1930's. The title 'Of Mice and Men' was taken from a famous poem written by Robert Burns. ...read more.

Crooks is being quite malevolent, and tries to order Lennie around, showing more desperation for power. Crooks is painfully aware that his skin colour is all that keeps him separate in this culture. He also knows that due to his skin colour, if he says anything it doesn't matter and his feelings aren't thought of. 'This is just a nigger talkin', an' a busted back nigger. So it don't mean nothing' This outsider status causes him to lament his loneliness, but he also delights in seeing the loneliness of others, perhaps because misery loves company. When Lennie asks Crooks 'why ain't you wanted?' Crooks reply is spiteful yet true; 'Cause I?m black.... They say I stink. Well, I tell you, you all of you stink to me'. But as soon as Crooks becomes conscious of Lennie not caring about about his skin colour, Crooks becomes kinder, and retreats from his over protective manner. From this,Crooks takes this opportunity to embrace this contingency to talk to someone, as knows that Lennie won't tell anyone what is said. 'A guy can talk to you an' be sure you won't go blabbin''. The tragedy in the conversation is that Lennie isn't paying attention to what is being said, he doesn't judge, and he doesn't emphasise with Crooks. Lennie just lets Crooks to talk, and yet Crooks knows this, but still carries on talking; he wants Lennie to be with him, he wants someone to talk to; and Crooks isn't offended by this. The reader sees Crooks open up about his past and his feeling towards his segregation and how he knows that he is the same as the other workers. ...read more.

Now you jus' get out,an' get out quick'. Now Curleys' Wife reminds Crooks what king of power she has over him in a brutal way. 'Nigger, I could get you strung up on a tree so quick it ain't even funny'. Even though women were inferior to men, she still had more rights and power over Crooks because of his skin colour. From this comment, Crooks remembers his position in society and returns to his isolated black self, 'Crooks had reduced himself to nothing'. This is a state black men go into when someone threatens their power. Here Steinbeck highlights the tragedy of Crooks life and reflects how black men were seen as lascivious. The reader feels sorry for Crooks and wishes he was treated better within that time period. Crooks is an important character because he symbolises a typical man in the 1930's stuck in poverty trap. Even though Crooks is a human being, his racist treatment dehumanises him, and he fights against it. Steinbeck shows this by describing Crooks' room as neat and tidy, and not how a savage beast would keep their room; especially as many people saw black men as savage beasts. Steinbeck presents Crooks as a tragic character who is unable to escape from his life. The reader sees Crooks get an opportunity to escape from his terrible life and become optimistic about it; but he's dream is soon crushed as he is reminded of his social hierarchy. The reader also sees Crooks constantly in pain, both emotionally and physically. This has a big effect on the reader as the reader feels even more sorry as he suffers with many problems and then has to have pain from his back. ...read more.

A very strong essay on the presentation of Crooks and his role in the essay. Points are coherently made and are fully supported with relevant evidence from the text.