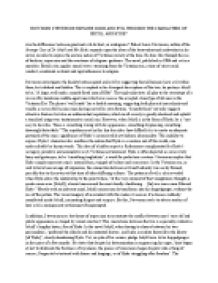 How does Stevenson explore good and evil through the characters of Jekyll and Hyde?

﻿HOW DOES STEVENSON EXPLORE GOOD AND EVIL THROUGH THE CHARACTERS OF JEKYLL AND HYDE? Are the differences between good and evil distinct, or ambiguous? Robert Louis Stevenson, author of the Strange Case of Dr Jekyll and Mr Hyde, expands upon the ideas of the benevolent and malevolent in his novel, in order to expose the austere nature of Victorian society at the time. He does this through the use of dualism, repression and the overtones of religious guidance. The novel, published in 1886 and set in a nameless British city, applies moral views stemming from the Victorian era, a time of strict social conduct, emotional restraint and rigid adherence to religion. Stevenson investigates the duality between good and evil by suggesting that all humans have evil within them, but subdued and hidden. This is implied in his divergent descriptions of the two; he portrays Jekyll to be, ?A large, well-made, smooth-faced man of fifty?. The triple adjectives all play to the stereotype of a successful, handsome middle-aged man which was seen as the accepted stereotype of all men in the Victorian Era. ...read more.

Victorian society implies that the ?hidden evil?, as touched on in the previous paragraph, is one?s true identity - Hyde. However, it is undesirable when compared to a crafted, outward character attuned to public ideals. Jekyll?s civility, generosity and success are the defining aspects of his character, and by social standards where one?s decency and popularity is as it appears outwardly, he attained fame. However, Jekyll admits that ?many a man would have even blazoned such irregularities as I was guilty of; but from the high views that I had set before me, I regarded and hid them with an almost morbid sense of shame.? In order to maintain his high social expectations and reputation which he had achieved, Jekyll is forced to conceal his indecent pleasures, which was an integral part of his individuality. Consequently, the more fame he garners the more repressed his character becomes. Jekyll was at a crossroads, between keeping his private self hidden and thus artificially suppressed or confessing them at the expense of his image. Through this, Stevenson suggests that humans should not suppress themselves in such a manner, criticizing the Victorian social standard of the time, which forgoed happiness for decorum. ...read more.

This makes apparent, to Stevenson?s Victorian readers, the advantages one may reap from the pursuit of spiritual practices as shown by Jekyll and Utterson?s characters in the story; rather than emulating Hyde, whose brutality and moral deviation is linked to doubting Christianity and association with the devil. To conclude, Stevenson reveals the rigid controls Victorian society imparts on people. He exposes how society has established repression as the standard. He implies that the conflicting duality of morals is directly linked to one?s private self that is suppressed, and depicts the fine line they walk between doing good or evil. All are influenced by both the malevolent and the benevolent; it is simply the management of balance between the two that differs. This is entailed in a manner which reflects upon the Victorian teachings and beliefs of the time the novel was written and its audience, and uses religion to give justification and verisimilitude to the story for readers to easily comprehend. These three themes tie together Stevenson?s overarching intention: to enlighten readers on the idiosyncratic and artificial nature of their rigid society. Word Count: 1500 ...read more.