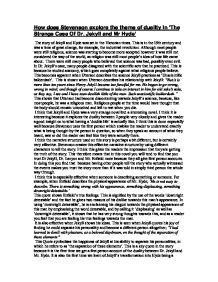 How does Stevenson explore the theme of duality in The Strange Case Of Dr. Jekyll and Mr Hyde

How does Stevenson explore the theme of duality in 'The Strange Case Of Dr. Jekyll and Mr Hyde' The story of Jekyll and Hyde was set in the Victorian times. This is in the 19th century and was a time of great change, for example, the industrial revolution. Although most people were still religious, science was starting to become more accepted however it was still not considered the way of the world, as religion was still most people's idea of how life came about. There were still many people who believed that science was bad, possibly even evil. In Dr. Jekyll's case, many people disagreed with the scientific acts that he practiced. This is because he studied anatomy, which goes completely against what religious people believe. This becomes apparent when Utterson describes the science Jekyll practices as 'Unscientific balderdash'. This is shown when Utterson describes his relationship with Jekyll: "But it is more than ten years since Henry Jekyll became too fanciful for me. He began to go wrong, wrong in mind; and though of course I continue to take an interest in him for old sake's sake, as they say, I see and I have seen devilish little of the man. Such unscientific balderdash." This shows that Utterson had become discontenting towards Jekyll's science, because, like most people, he was a religious man. ...read more.

Jekyll is a well built, proud and handsome man whereas Hyde is a small, slight, very secretive and even ugly man. This is described by Jekyll in his full statement of the case: The evil side of my nature, to which I had now transferred the stamping efficacy, was less robust and less developed than the good which I had just deposed. Again, in the course of my life, which had been, after all, nine tenths a life of effort, virtue and control, it had been much less exercised and much less exhausted. And hence, as I think, it came about that Edward Hyde was so much smaller, slighter and younger than Henry Jekyll. This quote is describing how Jekyll had spent 'nine tenths' of his life as a good man, full of effort on his life and towards other people, as well as complete self control, has had lots of time to flourish and develop in the world to become the good, kind man that everybody knew as Henry Jekyll. His other side however, the side he describes as 'Edward Hyde', he says is much smaller, slighter and younger than his other side, Henry Jekyll. This is due to the fact that this side represents the other part of his life, which you could call the other 'one tenth' of his life. ...read more.

Another connection directly between Jekyll and Hyde is Henry Jekyll's will. In his will it states that 'upon the death or disappearance of Henry Jekyll pass on all my possessions to Mr. Hyde'. This is another direct connection between Jekyll and Hyde. And finally, the other main symbol is handwriting. This is important because Jekyll's handwriting is the same as Hyde's, however they are both slanted differently. This is a strong indication that, the two characters are in fact 2 very different sides of one person. In conclusion, I think that Stevenson did explain duality well. He managed to keep the suspension of the mystery of Dr. Jekyll and Mr. Hyde right up until the very end which is difficult when the two characters in question are the main characters. I think Stevenson was also a little brave to write the story in the time that he did, with it being something completely new to the majority of people at the time. Even now, people know little about it and this book gives an extensive insight to the subject of duality. The novel gives the reader a clear insight into the concept of duality through the narrative structures that were used. This can be especially recognisable in the use of first person narrative as it gives the reader the ability to picture themselves in the scene that is being described. This therefore meant that after reading this book I feel like I have a good understanding of duality, and all the consequences that prevail from it. ?? ?? ?? ?? ...read more.