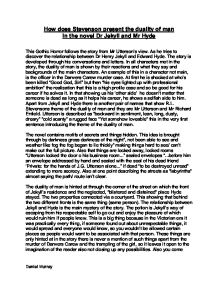 How does Stevenson present the duality of man

How does Stevenson present the duality of man in the novel Dr Jekyll and Mr Hyde This Gothic Horror follows the story from Mr Utterson's view. As he tries to discover the relationship between Dr Henry Jekyll and Edward Hyde. The story is developed through his conversations and letters. In all characters met in the story, the duality of man is shown by their reactions and what they say and backgrounds of the main characters. An example of this in a character not main, is the officer in the Danvers Carew murder case. At first he is shocked at who's been killed "Good God, Sir!" but then "his eyes lighted up with professional ambition" the realisation that this is a high profile case and so be good for his career if he solves it. In that showing us his 'other side' he doesn't matter that someone is dead as long as it helps his career, he shows a selfish side to him. ...read more.

if dead "to be destroyed unread" extending to more secrecy. Also at one point describing the streets as "labyrinths" almost saying the path/ route isn't clear. The duality of man is hinted at through the corner of the street on which the front of Jekyll's residence and the neglected, "blistered and distained" place Hyde stayed. The two properties connected via a courtyard. This showing that behind the two different fronts is the same thing (same person). The relationship between Jekyll and Hyde is the main mystery of the story. The potion is Jekyll's way of escaping from his respectable self to go out and enjoy the pleasure of which would ruin him if people knew. This is a big thing because in the Victorian era it was practically every thing, if someone found out about unrespectable things, it would spread and everyone would know, so you wouldn't be allowed certain places as people would want to be associated with that person. ...read more.

He could then carry out actions/pleasures without his reputation been affected if he was caught as he would not be recognised. Things such as murder someone they hate, or just for fun, sexual pleasure prostitutes, rent boys or even rape, however Stevenson doe not reveal to the reader what Jekyll/Hyde actually do, its left to the readers imagination. Stevenson quite frequently hints at the duality of man, some quite subtle, on the other hand he comes out with it in a bold way at one point of the novel. In Jekyll's full statement of the case he says "Man is not truly one, but truly two." The duality theory is definitely revealed, however he does go on to say "Others will follow, others will outstrip me on the same lines; and I hazard a guess that man will be ultimately known for a mere polity of multifarious, incongruous and independent denizens"- we are a wide variety of personalities not always matching with each other but we live as one person, we are truly many. Daniel Murray ...read more.

The candidate response well to the question but has trouble expressing themselves clearly. This is why I rated the essay with three stars. It has the makings of an essay that can score many more mars if the candidate worked ...

The candidate response well to the question but has trouble expressing themselves clearly. This is why I rated the essay with three stars. It has the makings of an essay that can score many more mars if the candidate worked in the Quality of Written Communication. In terms of content, there are a number of themes and presentations of the duality of man that are recognised, from something small as a minor character like a policeman to Dr. Jekyll himself. For future reference, I would advise that the candidate comment on the most important symbol of the themes first (Jekyll and Hyde, in this case) and then work their way to the least significant, as this essay does appear to be written on it's head, with the analysis of minor characters first; it just feel like the essay gets off to a very clunky and disjointed start because with minor characters, there is so little to write about that a whole paragraph consists of three of them and none are linked in the same way Dr. Jekyll and Mr. Hyde's relationship (which changes frequently) can be commented on.

The Level of Analysis is fair. It's a case of being too broad and not deep enough. There is plenty of content to satisfy the question, but the amount of content has limited the extent to which each piece of analysis can thoroughly be analysed. That is to say that there are some parts of the analysis that are worth spending more time on than the minor characters, however relevant. If there is more to say on one specific topic than another, then go for the former.
Where this candidate goes quite off the mark is where they begin to talk about secrecy and privacy. The analysis shown here is wholly accurate and would serve well if the question proposed had asked for it. As it is, the question does not ask for such analysis and therefore very few marks can be gained here if at all. It is absolutely imperative that candidate adhere to the question, regardless of what interesting pieces of analysis they want to show the examiner; if the question asks for the theme of the duality of Man, then do not talk about the recurrent motif of secrecy.

The Quality of Written Communication here is extremely poor, to the point that is becomes quite a task to read. The main issue here is that this candidate appears to write as they would speak. The difference between the two is not often stressed enough and candidates should never write as they would speak. There are subordinate clauses dotted all over the place; the answer is littered with comma splice and misuses of grammar, punctuation and spelling. It is simply not acceptable to see such poor QWC at GCSE grade. I recommend this candidate stop after every sentence and ensure that they have contained between a capital letter and a full stop, all the is required for a coherent, cohesive sentence (subject, verb, object being the bare necessities to make a cohesive sentence).