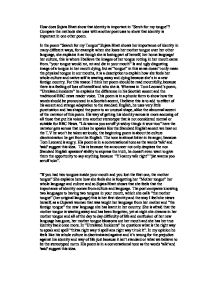 How does Sujata Bhatt show that identity is important in "Serch for my tongue"? Compare the methods she uses with another poet uses to show that identity is important in one other poem. In the poem "Search for my Tongue" Sujata Bhatt shows her importance of identity in many different ways, for example when she loses her mother tongue over her other language, she explains it as though she is losing part of herself, her home language/ her culture, this is where I believe the images of her tongue rotting in her mouth came from. "your tongue would rot, rot and die in your mouth" Is and ugly disgusting image of a tongue in her mouth dying, but as "tongue" in this sense doesn't only mean the physical tongue in our mouths, it is a description to explain how she feels her whole culture and native self is wasting away and dying because she's in a new foreign country. ...read more.

"If you had two tongues inside your mouth and you lost the first one, the mother tongue" She explains here how she feels she is forgetting her "Mother tongue" her whole language and culture and so Sujata Bhatt shows that she feels that the importance of identity comes from culture and language. The poet compares knowing two languages to having two tongues in your mouth, which she calls "the mother tongue" (her original language) this is her first identity and the way I feel she views herself, as a Gujarati woman that was taught her language from her mother and "the foreign tongue" the new language she has learnt in her country. She is afraid that the mother tongue is wasting away and has been forgotten, yet at night she dreams in her mother tongue and all of the day to day difficulty of life and confusion of her new language has gone, her mother tongue blossoms out her mouth and she has her true identity back once more. ...read more.

That's why he wouldn't be taken seriously as a News reader. Over all I believe that "Search for my tongue" gave a better insight to her identity and the way she feels. Sujata expressed her two identities/tongues as a constant fight and battle against each other, one tongue was always pushing the other away and she couldn't use both at the same time "pushes the other tongue aside" "you could not use them both together, even if you thought that way" "ties the other tongue in knots". It was my personal favourite because of the imagery used, such as the physical tongue rotting and dying in her mouth, and the way her mother tongue grows back "grows longer, moist, grows strong veins" like a plant growing and growing until it flowers into something beautiful "blossoms out of my mouth" it emphasises the beauty of her culture and her real self emerging and realisation of who she really is as she begins unsure as well as seeing that two languages can be moving as well as confusing. ...read more.

This is an essay response comparing the prescribed 'Search For My Tongue' by Sujata Bhatt and a self-selected second poem, an excerpt from Tom Leonard's 'Unrelated Incidents', with particuklar emphasis on how the poets use poetic and literary devices in ...

This is an essay response comparing the prescribed 'Search For My Tongue' by Sujata Bhatt and a self-selected second poem, an excerpt from Tom Leonard's 'Unrelated Incidents', with particuklar emphasis on how the poets use poetic and literary devices in order to show the importance of their idnetity. In this answer, the candidate focuses very vaguely on the devices the poets use, commenting on only the very obvious points such as Leonard's use of phonetics and Bhatt's use of her "mother tongue", Gujarati. The candidate misses important contextual factors that would've enhanced their answer, but the response they have given is entirely indicative of someone operating at a middle C grade.

The Level of Analysis shown appears very simlpistic and does not comment on much other than the poems' literal message. Commenting on this is will secure at least a C grade, but to gain higher marks, candidate need to delve deeper into why the poem is so effective in enforcing the importance of identity and to what lengths do the poets go in order to achieve this. Also, a commentary on the effect on the reader would help improve this answer, becauses analytical essays are always focused on the affect on the reader. For instance, the candidate has not considered the attitude and values of the peots in these poems as deeply as is possible. The poems have very obviously different attitudes, with 'Unrelated Incidents' being a satricial jibe at the RP accent and English pomposity, but how does Leonard achieve this? His use of Scottish phonetic spelling is one way (by forcing the reader to imagine themselves speaking an alien dialect and accent) but he also does it with the structure of the poem - it looks like a news coloumn in a newspaper. This is very obvious and should be commented on by all candidates, as it shows a comlete understanding of the functions of poetry and how poets go about manipulating structure as well as language in order to achieve affect. The result is a very sarcastic poem that mocks the English - this is his attitude; a very blunt rubttal to our nigh-on religious obsession with 'propriety'. He is very proud of his Scottish roots and therefore is not at all phased by the invasion of the English language - he is patriotic.
Contrastingly, in 'Search For My Tongue', Bhatt is completely clueless as to where her real identity lies, now with the confusion of whether to keep her "new tongue" and abandon her "mother tongue" or vice versa. THe candidate did well to comment on her use of Gujarati to explain this, but the comments overall were not explicit enough to gain the full marks available. Always be sure your writing is explicit, otherwise some examiners may miss your points.
Another fault with this essay is the lack of contextual appreciation. Appreciation of context is one of the main ingredients of an analytical essay, both to show the examiners you understand which angle/viewpoint the poet is coming from, but also to show that you understand the social and historical factors that influenced their writing the poem. Leonard is a Scotsman, and as such, the candidate could have said that because of the frictious relationship between the English and the Scots since the English invaded Scotland, the Scots do not have a very optimistic view of us and, when invading, we forced our language onto the Scots in order to iron our their own language, dialect and accent. This could be why Tom Leonard is brutally retorting the English language in his poem, because even in today's age the Scottish BBC news is read by newspersons with RP accents and Standard English dialect. THis level of appreciation must be applied to the analysis not as a huge chunk of text at the beginning of the poems before any analysis has taken place, but it must be integrated into the answer, tagged off of pieces of analysis that requires contextual backgrounds in order for the analytical points to be considered effective.

The Quality of Written Communication is average. There are no glaring errors made in the candidate grammar, spelling or use of punctuation, though a larger range of punctuation points could improve this answer by shoing the examiner that they are a confident writer who has an adpet understanding of how to use more complex punctuation. Also, as a final note, candidates must be aware that when writing the title of a poem/name of a poet, all the words/names must be capitalised - this is primary school knowledge and should not be ignored at GCSE.