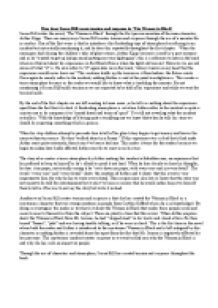 How does Susan Hill create tension and suspense in &quot;The Woman in Black&quot;?

﻿How does Susan Hill create tension and suspense in ?The Woman in Black? Susan Hill writes the novel, ?The Woman in Black? through the first person narration of the main character, Arthur Kipps. There are many ways Susan Hill creates tension and suspense through the use of a narrator for us readers. One of the first ways is that he introduces this foreboding type of atmosphere by referring to an incident but not actually mentioning it, and he does this repeatedly throughout the first chapter. When the room goes dark during the children?s tales of ghost stories, Arthur Kipps becomes scared by a past memory and as he ?wanted to get up and go round putting on every light again?, this is a reference to later in the book when we find out about his experiences in Eel Marsh House when the lights all turn out. ...read more.

Yet still not revealing what the incident actually is. With the knowledge of it being quite a terrifying one we know that when he tells his story we should be expecting something which is grim as. When his step children attempt to persuade him to tell of his ghost story begins to get uneasy and leaves the room without an excuse. He then ?walked about in a frenzy.? If this experience was so bad that it had made Arthur react quite extremely, then it must?ve been a bad one. This makes it tense for the readers because we begin to realize how badly affected Arthur must be to react in such a way. The story also creates a tense atmosphere by Arthur making this incident a forbidden one, an experience that he preferred to keep to himself as he?s afraid to speak it out loud. ...read more.

By doing so it intrigues the reader as to what is it about the Woman in Black that makes these people recoil and seem to reserve themselves from the subject. There are plenty a time that this occurs. When Arthur enquires about the Woman in Black from Mr. Jerome; he had ?stopped dead? in his tracks and stared at him. He then turned ?frozen?, ?pale? and was having trouble talking, as if he were in shock. This is the first time in the novel where both the reader and Arthur is introduced to the mysterious Woman in Black and is left intrigued by this character as nothing further is revealed about her apart from the fact that Mr. Jerome is negatively affected by her presence. This mysterious incident creates suspense as we wait to find out; who the Woman in Black is and why she has such an impact on people. Through the use of characters and atmosphere, Susan Hill has created tension and suspense throughout the book. ...read more.