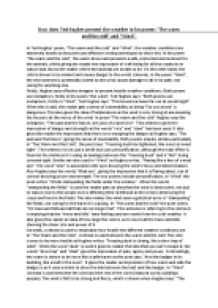 How does Ted Hughes present the weather in his poems The Warm and the Cold and Wind.

﻿How does Ted Hughes present the weather in his poems ?The warm and the cold? and ?Wind?. In Ted Hughes? poem, ?The warm and the cold? and ?Wind?, the weather conditions are extremely hostile as the poet uses effective writing techniques to show this. In the poem ?the warm and the cold?, the warm shows and presents a safe, protected environment for the animals, whilst giving the reader the impression of well-being for all the creatures in nature and shows the reader where the animals are meant to be. On the other hand, the cold is shown to be violent and causes danger to the world. Likewise, in the poem ?Wind?, the environment is potentially violent as the wind causes damage to all in its path, not caring for anything else. Firstly, Hughes uses effective imagery to present hostile weather conditions. Both poems use metaphors, firstly in the poem ?the wind?, Ted Hughes says: ?Both poems use metaphors, firstly in ?Wind?, Ted Hughes says: ?This house has been far out at sea all night?. When this is said, the reader gets a sense of vulnerability as being ?Far out at sea? is dangerous .This also gives ...read more.

In ?The warm and the cold? the poet writes, ?On trees and hills and all that can no longer feel?. This sentence is referring to the cold as it is implying that the ?trees and hills? have feelings and are numb from the cold weather. It also gives the reader an idea of how large the cold is, as it covers all the trees and hills showing the sheer size and power of it. Secondly, contrast is used to emphasise how hostile the different weather conditions are. In ?The Warm and the Cold?, contrast is used between the warm and the cold. The cold is seen to be more hostile as Hughes writes: ?Freezing dusk is closing, like a slow trap of steel?. When the word ?dusk? is used it gives to reader the idea that you can?t escape it, the words ?slow trap? and ?steel? gives the impression of pain, agony and power. Contrastingly, the warm is shown to be more like a safe haven as the poet says, ?And the badger in its bedding, like a loaf in the oven?. ...read more.

The poet makes the wind seem more destructive as he says: ?Once I looked up ? Through the brunt wind that dented the balls of my eyes?. This uses first person narrative as the word ?I? has been used showing that the person done it and not someone else, It also shows how strong and powerful the wind is as it ?dented the balls of my eye? showing the sheer brutality of the wind. In conclusion, I think that the poem ?The Warm and the Cold? was very effective and I prefer it to the poem ?Wind?. I think this as it used contrast between two very different things; it added to the effect to each the warm and the cold. It also used analogy?s to emphasise each quotation about the warm and the cold. For this reason, I particularly thought that this sentence was effective, ?And the badger in its bedding, like a loaf in the oven?. I also thought this was effective as it gives the reader a sense of how warm and safe the badger was in its bedding, which engages the reader in the poem. ...read more.