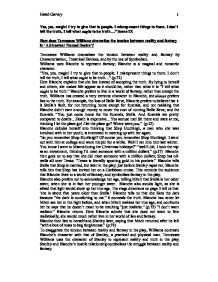 How does Tennessee Williams dramatise the tension between reality and fantasy in 'A Streetcar Named Desire'?

Blanche is living in her fantasy world, the old world, where men stand when a woman enters the room, but Stanley is in the modern world "Nobody's going to get up, so don't be worried." (p.26) This remark really reminds the audience of the differences between Stanley and Blanche. Williams also uses Music to dramatise the tension between reality and fantasy. As she gets more wrapped up in her fantasy land, Blanche hears the Varsouviana more frequently, the Varsouviana is the polka tune that haunts Blanche in connection with her husband's death. The audience can hear it too, but the other characters cannot. Just before the doctor takes Blanche away, she is hearing the Varsouviana a lot. 'The "Varsouviana" rises audibly as Blanche enters the bedroom.' (p.83) ...'The "Varsouviana" faintly plays.' (p.85) And then 'The "Varsouviana" is filtered into weird distortion,' (p.87) The Varsouviana represents Blanche's fantasy world. It plays when Blanche lapses completely into fantasy, and also seems to explain why she lives in her fantasies. The Varsouviana was the song that was playing when Blanche's husband Allan shot himself. When Blanche sings in the bathroom "say, it's only a paper moon, Sailing over a cardboard sea- But it wouldn't be make-believe if you believed in me!" ...read more.

The specific stage directions that Williams provides means that the director is able to present the play in the way it was meant to be shown, and that the audience will be able to understand what it was that Williams was trying to achieve in his writing. The blue piano is a constantly reoccurring motif that Williams uses to represent that whether we choose to live in fantasy or reality, life still goes on. Whereas only Blanche hears the Varsouviana, and only Stanley realises that much of what Blanche says are lies, all the characters hear the blue piano. 'A Streetcar Named Desire' is a non-naturalistic play, which gives the impression of fantasy. So we could conclude from this that Williams does wish the viewer to be contemplating reality and fantasy as they watch the play. Williams uses symbolism strongly throughout the play; the place names represent the contrast between fantasy and reality; the people are characterised- Stanley representing reality, Blanche representing fantasy; Light is used to represent truth and honesty; and music- the Varsouviana, 'It's only a paper moon' and the blue piano; and Place names help to contrast between reality and fantasy. 1 Hazel Garvey ...read more.