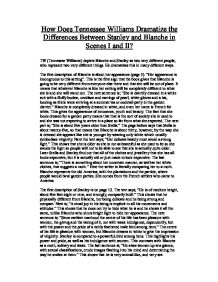 How Does Tennessee Williams Dramatize the Differences Between Stanley and Blanche in Scenes I and II?

How Does Tennessee Williams Dramatize the Differences Between Stanley and Blanche in Scenes I and II? TW (Tennessee Williams) depicts Blanche and Stanley as two very different people, who represent two very different things. He dramatizes this in many different ways. The first description of Blanche is about her appearance (page 5). "Her appearance is incongruous to this setting". This is the first sign that the book gives that Blanche is going to be very different from everyone else there and that she will be out of place. It means that whatever Blanche is like her setting will be completely different to what she is and she will stand out. The next sentence is; "She is daintily dressed in a white suit with a fluffy bodice, necklace and earrings of pearl, white gloves and a hat, looking as if she were arriving at a summer tea or cocktail party in the garden district." Blanche is completely dressed in white, and even her name is French for white. This gives the appearance of innocence, youth and beauty. ...read more.

Here the writer is literally comparing her to a moth. Blanche represents the old America, with the plantations and the partide, where people would have garden parties. She comes from the French settlers who came to America. The first description of Stanley is on page 13. The text says; "He is of medium height, about five feet eight or nine, and strongly, compactly built." This shows that he physically different from Blanche, her being delicate and he being strong and compact. Next is; "Animal joy in his being is implicit in all his movements and attitudes." This shows that he does not try to hide what he is and he shows it all the same, unlike Blanche who shuns bright light to hide her appearance. The next sentence is; "Since earliest manhood the centre of his life has been pleasure with women, the giving and the taking of it, not with weak indulgence, dependently, but with the power and the pride of a richly feathered male bird among hens." The centre of his life is pleasure with women, but Blanche dresses in white to give the impression of virginity. ...read more.

Cemeteries stand for the death of Blanche's boy husband and all the deaths at Belle Reve, and Elysian Fields stands for the resting place for the Dubois family. Elysian Fields is a term for heaven, and it is the end of life. Stella and Blanche are the last surviving members of the Dubois family. Blanche is not married and has no children, but Stella is married with the name of Kowalski, and is pregnant with Stanley's child. This child represents the end of the Dubois family and the old America, but the beginning of the Kowalski family and new America. Blanche has a very nervous disposition and does not like loud noises. On page 15 a cat screeches near the window. Blanche jumps up and cries; "What's that?" She is really startled by it, but Stanley just replies; "Cats.... Hey, Stella!" So he is used to loud noises and it isn't an important event because he changes the subject almost immediately. The writer uses dramatic devices to emphasize something. Whenever Blanche thinks or talks about the past, the 'Polka' music starts playing. This represents Blanche's past and old America. The music that is associated with Stanley is the 'Blue Piano' which also represents new America. ...read more.