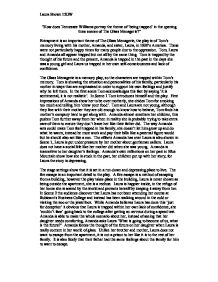 &quot;How does Tennessee Williams portray the theme of 'being trapped' in the opening three scenes of The Glass Menagerie?&quot;

"How does Tennessee Williams portray the theme of 'being trapped' in the opening three scenes of The Glass Menagerie?" Entrapment is an important theme of The Glass Menagerie, the play is of Tom's memory living with his mother, Amanda, and sister, Laura, in 1930's America. These were not particularly happy times for many people due to the oppression. Tom, Laura and Amanda all appear trapped but not all by the same thing. Tom is trapped by the thought of his future and the present, Amanda is trapped in the past in the days she was a young girl and Laura us trapped in her own self-consciousness and lack of confidence. The Glass Menagerie is a memory play, so the characters are trapped within Tom's memory. Tom is showing the situation and personalities of his family, particularly his mother in ways that are emphasised in order to support his own feelings and justify why he left them. In the first scene Tom acknowledges this fact by saying 'it is sentimental, it is not realistic'. ...read more.

Laura is happier inside, in the refuge of her home she is scared by the world and protects herself by keeping it away from her. In Scene 2 the audience discover that Laura has not been attending her course at Rubicam's Business College and instead has been walking around in the cold or visiting the zoo or the jewel box. While Amanda believes Laura has done this 'just for deception' it obvious that Laura is trapped within her own lack of confidence, she 'couldn't face' going back to the college after getting so nervous during a speed test. Amanda is able to make the whole scenario about her, instead of seeing that her daughter needs comforting, Amanda asks Laura 'What is going to become of us, what is the future?' Amanda forces the thought of the future on her daughter when Laura is really content in her world of glass. Unlike her brother and mother, Laura does not want to escape from the apartment, it is not a prison to her like it is to the rest of her family. ...read more.

The Wingfield family are not the typical family. Amanda is an over compensating parent and while she acts caring she is dependent on her children's' futures, she is also insensitive to their needs. Laura is the only member of the family happy to be at home, she needs comfort and to be kept away from the wider world as she is afraid of the consequences, she loves her brother and mother a great deal and is hurt when they argue. Tom does feel a sense of duty to his sister but the way his mother treats him is enough to drive him away from the family. The family are dysfunctional and this may be a contributing factor to the element of entrapment, instead of supporting each other they end up hurting each other and leaving each other with the sense of failure and letting each other down. The characters could also be trapped by guilt and also the pain of the absent father. While they avoid talking about him, his presence is felt from the 'larger-than-life-size photograph above the mantel'. There is a general sense of failure and unhappiness in the play it could be this that traps the characters where they are. Laura Brown 12GW ...read more.