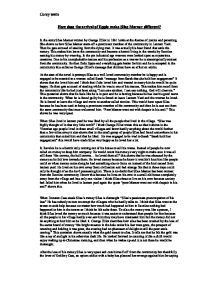 How does the arrival of Eppie make Silas Marner different?

How does the arrival of Eppie make Silas Marner different? In the story Silas Marner written by George Elliot in 1861 looks at the themes of justice and parenting. She shows us how Silas Marner starts off a prominent member of the community in Lantern Yard. Then he gets accused of stealing from the dying man. It was actually his best friend that stole the money. This makes him leave the community and become a hermit living in the woods by Raveloe earning his money by weaving. In the pre industrial age weavers were looked upon as mysterious creatures. Due to his unexplainable trances and his profession as a weaver he is stereotypically outcast from the community. He then finds Eppie and everything gets better for him and he is accepted in the community this enforces George Elliot's message that children have an affect on adults. At the start of the novel it portrays Silas as a well loved community member he is happy and is engaged to be married to a woman called Sarah "message from Sarah that she held her engagement" It shows that she loved him and I think that if she loved him and wanted to marry him he would be quite happy. He then gets accused of stealing whilst he was in one of his trances. ...read more.

the people in his village hardly ever saw him they may have mistreated him but the money did not do anything to hurt him so he liked it. George Elliot describes how silas has been crushed by the loss of his secret hoard of money "the bright treasure in the hole under his feet were gone, the prospect of counting and holding it was gone, the evening had no phantasm of delight to still the poor souls craving." This quotation shows exactly what the gold meant to silas. It tells me that he felt the gold was like a ray of sunlight in his otherwise dark life. He looked forward to counting it like a child would enjoy waking up to Christmas morning, and then when he wakes up and it is not there he would be distraught. After the loss of his money Silas is very upset and cuts himself off from the community but thankfully the lover of Godfrey Cass, an opium addict with a baby has planned her revenge against him for saying in a fit of emotion. "I would rather die than acknowledge her as his wife." This would upset Godfrey's wife very much and would also make her angry so as her revenge she planned to get Godfrey where she knew it would cause him the most pain. ...read more.

Sugar would have been expensive in them days and Silas was a miser so would not use it but when Eppie came along he used the expensive sugar this shows an immediate change in Silas. At the end of the novel Silas tells Eppie how she saved his life. "If you hadn't been sent to save me I would have went to my grave in misery." This shows that Silas felt as though if Eppie didn't come to him he would have died as a lonely old man in pain it also shows that he is thankful that Eppie came to him even though he has his money back he does not care because he has something much better he has love in his life now. Silas felt that if he didn't get his gold back and that if Eppie hadn't turned up he would have died. I think that Silas changes because he is treated as equal to the rest of the villagers at the start he is treated as a lower class of person because he keeps his life private but in the end when he is involved in the community thanks to Eppie he is treated as an equal. My overall opinion of Silas is that because he had a disability he is treated badly but when people give him a chance and he gives them a chance they see that he is just a normal man. ?? ?? ?? ?? Corey watts ...read more.