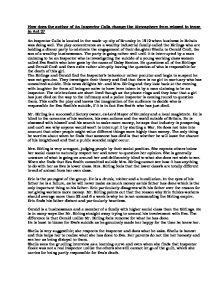 How does the author of An Inspector Calls change the Atmosphere from relaxed to tense in Act 2?

How does the author of An Inspector Calls change the Atmosphere from relaxed to tense in Act 2? An Inspector Calls is located in the made up city of Brumley in 1912 when business in Britain was doing well. The play concentrates on a wealthy industrial family called the Birlings who are holding a dinner party to celebrate the engagement of their daughter Sheila to Gerald Croft, the son of a wealthy businessman. The party is going rather well until it is interrupted by a man claiming to be an Inspector who is investigating the suicide of a young working class women called Eva Smith who later goes by the name of Daisy Renton. He questions all of the Birlings and Gerald Croft and then exits rather abruptly leaving the question of who is responsible for the death of this girl. The Birlings and Gerald find the Inspector's behaviour rather peculiar and begin to suspect he was not genuine. They investigate their theory and find that there is no girl in mortuary who has committed suicide. This news delights Mr. and Mrs. Birling and they look back at the evening with laughter for them all being so naive to have been taken in by a man claiming to be an inspector. The celebrations are short lived though as the phone rings and they hear that a girl has just died on the way to the infirmary and a police inspector is coming round to question them. ...read more.

'. With the snobby expression of why should I a high-class respected lady recognize some peasant from the streets. Mrs. Birling believes that she can really hide the truth from the Inspector and is extremely shocked at the reply to her statement and says that she does not understand him. Her plan of trying to intimidate the Inspector fails miserably as he would repeatedly think that she is lying. Mr. Birling dithers slightly wondering what to do and then pluck up enough courage to confront the Inspector saying he must apologize at once. Now you can really see how tense things are becoming and how intimidating the Inspector is, putting Mrs. Birling in her place. The Inspector looks at Mr. Birling puzzled for he can't see that he has done anything wrong. Mr. Birling finds the Inspector not obeying his command and making a joke out of his family so he tries to use his social position to scare him saying 'I am a public man'. Unfortunately for Mr. and Mrs. Birling have underestimated the Inspector . He informs Mr. Birling that "Public men have responsibilities as well as privileges" trying to make him responsible for what he has done. Mr. Birling agrees with the Inspector but then tries to out wit him by saying "But you weren't asked to come and talk about my responsibilities.". ...read more.

Mrs. Birling suggests that the culprit who she believes to be is the father is responsible and should be dealt with severely. Sheila suddenly works out why the Inspector is asking her Mother what to do with the father as she realizes that Eric is the Father and that this unknown fact will later embarrass her mother even more when her mother has blamed the suicide totally on him. The Inspector tells Mrs. Birling he's waiting to do his duty and Mrs Birling I would think would go into shock. The whole feeling terrifies Mr. Birling before he himself hoping that it's not all true and then asks the Inspector if Eric is the father of Eva's child. He then says '...you're not trying to tell us - that my boy - is mixed up in this?'. He says he words 'my boy' giving the impression that he cannot except that his darling little son Eric could do such a disgraceful thing as impregnate a low social class woman and fund her by stealing from him. This shows how ironic the Birlings are: they don't believe Eric has an alcohol problem, Alderman Meggarty harasses girls, Brumley has prostitutes and that there son could steel from them and get Eva pregnant. Eric enters into the room and then the tension mounts to a peak if whether the Birlings will go to jail and what Eric will say to what the Inspector has told his family he has done. ...read more.