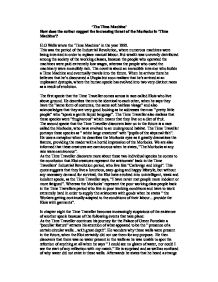 How does the author suggest the increasing threat of the Morlocks in 'Time Machine'? H.G Wells wrote the 'Time Machine' in the year 1895. This was the period of the Industrial Revolution

'The Time Machine' How does the author suggest the increasing threat of the Morlocks in 'Time Machine'? H.G Wells wrote the 'Time Machine' in the year 1895. This was the period of the Industrial Revolution, where numerous machines were being invented in order to replace manual labour. But wealth was unevenly distributed among the society of the working classes, because the people who operated the machines were paid extremely low wages, whereas the people who owed the machinery were incredibly rich. The novel is about an incredible inventor who builds a Time Machine and eventually travels into the future. When he arrives there he believes that he's discovered a Utopia but soon realises that he's arrived at an unpleasant dystopia, where the human specie has evolved into two very distinct races as a result of evolution. The first specie that the Time Traveller comes across is race called Elois who live above ground. He describes them to be identical to each other, when he says they have the "same form of costumes, the same soft hairless visage" and also acknowledges that they are very good looking as he addresses them as " pretty little people" who "speak a gentle liquid language". The Time Traveller also realises that these species were "frugivorous" which means that they live on a diet of fruit. ...read more.

He is surprised and as well as confused of why water did not exist in these wells. Afterwards he states that he heard a strange sound of a "thud-thud, like the beating of a big engine" in all the wells and questions of what it could possibly be. All of these strange and uncertain discoveries amplify the Time Traveller curiosity to find out more about this unusual environment. The Time Travellers' first meeting with a Morlock is at a narrow dark gallery where he realises a pair of eyes starring at him form the darkness when he says "a pair of eyes were watching me out of the darkness" and exclaims that he was struck by fear when as he states, "The old instinctive dread of wild beast came upon me" He also admits that his voice was " harsh and ill-controlled" when he remembered the strange terror of the darkness. He then puts his hand out and suddenly comes in contact with something tender when he states "touched something soft" and again a pair of eyes whizzed around him and something, which appeared like an ape-like figure, dashed past him. The Time Traveller is spooked out to come across these horrid creatures in this strange fundamental darkness. Furthermore the reader is kept in suspense as well as provided with a sense of fear about these creatures, as the reader is has not been given full knowledge about these creatures. ...read more.

Tension is rapidly arisen throughout this chapter, as the author gradually provides us with alarming hints about the new discovered creatures. For example when he says, "they made a queer laughing noise and came back to me" and how they stealthy attack the Time Traveller in the darkness. The books intensity increases as we become more aware of the Morlocks by gradually upholding the reader in suspense for example when he states " but there was an altogether new element in the sickening quality of the Morlocks". Tension is risen because we not aware of what the Morlocks unique quality is. The situation also intensifies in many dangerous occasions where the Time Traveller has been under attack by the Morlocks when he describes the scene " they clutched at me boldly". The reader is provided with a sense of excitement of what will happen next. The Time Machine is a warning of what will happen to mankind if capitalism continues to exploit workers for the benefits of the rich. The Time Traveller concludes that the working class people have been pushed underground for so long that they evolved into distinct, nighttime species. The upper class have remained above ground, and as a result of their lack of strategy for survival, they have transformed turned into weak, lazy, and dependent creatures. Due to the poor environmental conditions underground the Morlock specie have had no choice but to hunt down the Elois as no other food had been available for them. ...read more.