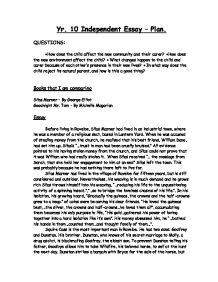 Yr. 10 Independent Essay - Plan. QUESTIONS: *How does the child affect the new community and their carer? *How does the new environment affect the child? * What changes happen to the child and carer because of each other's presence in their new lives? * In what way does the child reject its natural parent, and how is this a good thing? Books that I am comparing Silas Marner - By George Elliot Goodnight Mr. Tom - By Michelle Magorian Essay Before living in Raveloe, Silas Marner had lived in an industrial town, where he was a member of a religious sect, based in Lantern Yard. When he was accused of stealing money from the church, he realised that his best friend, William Dane, had set him up. Silas's "...trust in man had been cruelly bruised." All evidence pointed to his having stolen money from the church, and Silas could not prove that it was William who had really stolen it. ...read more.

There is an accident, which kills the horse, but leaves Dunstan alive to walk home. On the way back to Raveloe, he loses his way in the thick fog, and stumbles across Silas's cottage. The cottage is empty and Silas has gone on an errand, but has a cataleptic fit, on the way back, causing him to lose consciousness and track of time. Whilst Silas is gone, in his greed, Dunstan steals Silas's gold, "Who would know that anyone had come to take it away?" When Silas returns to his cottage, he sees that the gold has gone. He searches everywhere in disbelief, that it can have gone, "Didn't the gold lie there after all?". He is devastated; "He put his trembling hands to his head and gave a wild ringing scream, the cry of desolation". He goes to the Rainbow Inn to tell the Villagers of his loss, in the hope of recovering his lost gold. ...read more.

When Silas recovers from his catalepticfit he sees the child by the fire and mistakes it for his gold, "It seemed as if there were gold on the floor in front of the hearth. Gold! - his own gold". When he goes to see the gold, he discovers that it is actually a "sleeping child... with soft yellow rings all over it's head". Silas first hinks that it is a reincarnation of his little sister who died "when he was a small boy without shoes or stockings". He then goes outside & finds the body of the dead mother. Silas takes the child to the great dance, to report the death of the mother and the discovery of the child. When silas tells them this Gofrey doesn't admit that the child is his & that he is married to he woman. Silas announces that he intends to care for the child, and nobody opposes him. Silas christens the child Eppie, and looks after her well. Eppie follows Silas everywhere ...read more.