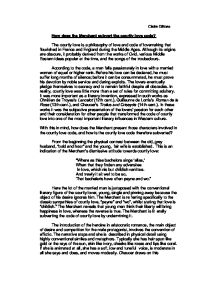 How does the Merchant subvert the courtly love code?

Claire Gittoes How does the Merchant subvert the courtly love code? The courtly love is a philosophy of love and code of lovemaking that flourished in France and England during the Middle Ages. Although its origins are obscure, it probably derived from the works of Ovid, various Middle Eastern ideas popular at the time, and the songs of the troubadours. According to the code, a man falls passionately in love with a married woman of equal or higher rank. Before his love can be declared, he must suffer long months of silence; before it can be consummated, he must prove his devotion by noble service and daring exploits. The lovers eventually pledge themselves to secrecy and to remain faithful despite all obstacles. In reality, courtly love was little more than a set of rules for committing adultery. It was more important as a literary invention, expressed in such works as Chr�tien de Troyes's Lancelot (12th cent.), Guillaume de Lorris's Roman de la Rose (13th cent.), and Chaucer's Troilus and Criseyde (14th cent.). In these works it was the subjective presentation of the lovers' passion for each other and their consideration for other people that transformed the code of courtly love into one of the most important literary influences in Western culture. ...read more.

Almoost he swelte and swowned ther he stood,/ So soore hath Venus hurt hym with hire brond," elevating the infatuation of a young servant for a girl from the streets to the level of knights and ladies of high romance. The lexis used to describe Damian's condition are typical of the courtly lover, in "peyne" and "swowned." However, one could see this description of Damian's condition as revealing the Merchant's disdain of the courtly love code, almost making a mockery of Damian's behaviour whilst still remaining within the convention. However, the fact that he is a servant and that the object of his desires is a young woman of the town, of such easy virtue that she readily succumbs to his advances; which once again undermines the courtly love code. As the object of desire was conventionally a woman of equal or higher rank. So although the Merchant is seemingly remaining within the literally convention he is overtly undermining the code by revealing the social snobbery behind the convention and allowing it to become a source of humour. Furthermore, Chaucer alters the courtly love code by having the Merchant reveals the voice of May who takes pity"of this sike Damyan." This defies the courtship conventional, as traditionally the Lady remains mute. ...read more.

This reduces the nature of the romance to a very basic level of attraction and ambition; thereby undermining the honour of the courtly code convention. This is inharmoniously compared yet again with noble examples taken from classical legend, as January is ludicrously paired with Argus. With Damian and May identified with Pyramus and Thisbe, the lovers who eloped after speaking to each other through a chink in a wall. This classical reference, along with may others in the tale, are drawn from the Latin poet Ovid considered in Chaucer's time to be the major classical poet of love. Continuing the idea of May's control and thereby undermining the code of chivalry and courtly love, May ends the tale remaining completing in control. Her vigorous and unladylike leap down from the tree. This is the final display of unconventional courtly love behaviour, which is presented by the Merchant, reaffirming his view of the code. In addition, the Merchant subverts the code of courtly love, by making comparisons between Joseph and Mary and May and January. May's invocation of the Virgin Mary, Queen of Heaven, this reminds the reader of the comparisons and contrasts between the superficially similar Joseph and Mary and January and May, which has been threaded throughout the tale. ...read more.