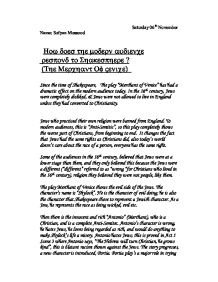 How does the modern audience respond to Shakesphere ? (The Merchant Of Venice)

Portia out of all the characters is a beautiful and rich lady, but also turns out to be racist. Portia's father decreed that she must marry the man who picks the right casket. This makes the audience feel sympathy for her because she does not have any right to choose who she loves, but when she realises the Prince of Morocco has come to take her hand in marriage, her racism increases. This is proven in Act 1 Scene 2 when Portia says "If he have the condition of a saint, and the complexion of a devil, I had rather he should shrive me than wive me." This scene expresses Portia's true feeling for other races. This scene impressed 17th century audience, with the racism shown. If this play was updated, like the 17th century audiences accepting the stereotype, modern audiences also have acceptable stereotypes, if instead of a Jew, Shylock was an American, and modern audiences saw it today, they would still feel the same way as the late 17th century audiences, they would laugh. To modern audiences this would be an acceptable stereotype, which was the same case with the 17th century audiences, they also accepted it. The three caskets have many fairytale elements to it. For example. Portia is a beautiful princess under a spell (the conditions laid down in her fathers will). ...read more.

When in the courtroom scene, the Duke expects Shylock to be merciful, but Shylock replies that he has sworn to do what it says in the bond, and purely because he hates Antonio. This is proved in Act 4 Scene 1 where Shylock says "More than a lodged hate and certain loathing." When all looks lost for the Merchant, Portia (The Christian Heroine) comes to save the day. Portia studying the bond deeply, also agrees with Shylock that he deserves to get his vengeance, but he realises he can't because it does not state that he may kill, or drop blood of Antonio's. Shakespeare's audience here were happy to see Shylock being tortured by his own writing, he made the bond, and has ruined his life by doing what he had sworn to do. Modern Audience are affected a lot in this scene. Because Shakespeare completely reverses the scene, he lets the torture go upon Shylock, and for a happy ending, he decides that Shylock must convert to Christianity. Modern Audiences look at this play and are shocked, with the amount of racism shown, and how people were forced to do things they did not want to do. Everyone now in our society has a free right to speech, and are not forced to do anything, but Audiences in Shakespeare's time did not believe that Jews had rights, only because of their beliefs. Although Shakespeare's plays are still funny now, it still disturbs modern audiences mainly because of the racism shown. ????????????????? ...read more.