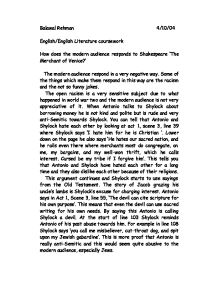 How does the modern audience responds to Shakespeare 'The Merchant of Venice?'

Balawal Rehman 4/10/04 English/English Literature coursework How does the modern audience responds to Shakespeare 'The Merchant of Venice?' The modern audience respond in a very negative way. Some of the things which make them respond in this way are the racism and the not so funny jokes. The open racism is a very sensitive subject due to what happened in world war two and the modern audience is not very appreciative of it. When Antonio talks to Shylock about borrowing money he is not kind and polite but is rude and very anti-Semitic towards Shylock. You can tell that Antonio and Shylock hate each other by looking at act 1, scene 3, line 39 where Shylock says 'I hate him for he is Christian '. Lower down on the page he also says 'He hates our sacred nation, and he rails even there where merchants most do congregate, on me, my bargains, and my well-won thrift, which he calls interest. Cursed be my tribe if I forgive him'. This tells you that Antonio and Shylock have hated each other for a long time and they also dislike each other because of their religions. ...read more.

So that was the reason why Portia doesn't want to marry the English baron. The modern audience does not like to see or hear something which could be insulting to their different relatives and friends from other nationalities that would be abused by this play. Even though Shylock is subjected to a lot of racism through out the play, he can not justify his desire to kill Antonio just because he spat at him and called him names such as "misbeliever", "dog" etc. I think that Shakespeare intended to make him seem a heartless person, so when they punished him the audience would not feel sorry for him because of his behaviour throughout the play. Shylock also, in the trial scene, is made to look ruthless and unforgiving so the audience doesn't feel sorry for him when he is punished. He is offered three times the original amount but he doesn't accept it so this gives the audience the idea that all Shylock wants to do at the moment is kill Antonio.This makes the audience feel sorry for Antonio and it makes them dislike Shylock even further. ...read more.

It is when Portia and Nerissa both start to tease and mess around with Bassonio and Gratiano that some things that are said are funny. For example, when Nerissa says that she will sleep with the clerk of the lawyer because he has the ring, Gratanio replies that if he catches the clerk with her he will cut his 'pen' off. This type of joke is known as a dirty joke and is mainly used for an adult audience. To sum things up I think that the modern audience would; out of a hundred percent; about fifteen percent would like it. These types of people would like it because they are either a Shakespeare fan or a Christian who was very anti - Semitic and thinks what Shakespeare wrote is still acceptable in the present time and moment. As for the percentage of people who did not like the play is probably because of the racism and the stereotypical nature of the play. To make things worse instead of better are the jokes except the odd one or two, so not liking the play is not a big deal, because you have loads of valid reasons not to like it. ...read more.