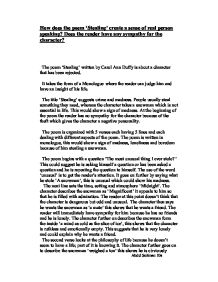 How does the poem 'Stealing' create a sense of real person speaking? Does the reader have any sympathy for the character?

How does the poem 'Stealing' create a sense of real person speaking? Does the reader have any sympathy for the character? The poem 'Stealing' written by Carol Ann Duffy is about a character that has been rejected. It takes the form of a Monologue where the reader can judge him and have an insight of his life. The title 'Stealing' suggests crime and madness. People usually steal something they need, whereas the character takes a snowman which is not essential in life. This would show a sign of madness. At the beginning of the poem the reader has no sympathy for the character because of the theft which gives the character a negative personality. The poem is organized with 5 verses each having 5 lines and each dealing with different aspects of the poem. The poem is written in monologue, this would show a sign of madness, loneliness and boredom because of him stealing a snowman. The poem begins with a question 'The most unusual thing I ever stole?' This could suggest he is asking himself a question or has been asked a question and he is repeating the question to himself. ...read more.

The third verse tells us about the character's life and the things he does, 'I joy-ride cars' which is pointless and has no joy. It seems as though he does it for fun, 'to nowhere' there's no real reason to why he does, and it doesn't do him any good. In the next line he is shown to be isolated, 'I'm a mucky ghost', the use of the metaphor shows what type of thief he is. The character use's colloquial speech which suggests he shows his expressions in his own way 'maybe pinch a camera' also the use of the word 'camera' perhaps shows that he is stealing other people's lives because he has no friends. The character is very careful of his steps' I watch my gloved hand twisting the doorknob'. The character on the last line of the third verse is shown to be potentially dangerous 'A stranger's bedroom?' he is invading people's privacy, which suggests lack of respect. The character looks at him self in the mirror 'Mirrors' reflection is not a true picture this could suggests he is very lonely. ...read more.

also shows that the reality is that he didn't actually play the guitar but he thought about it and gave it up, which shows that he has no future. The poem ends with a question to the reader. 'You don't understand a word I'm saying, do you?' this suggests a lack of empathy, hidden implicit, no question and the question has not been answered. The character realizes that nobody understands what he has said but asks the reader anyway because he is lonely, the reader at the end of the poem will have sympathy for him because he his whole seems to be nothing as he is lonely and has no friends. The mood of the poem begins by an introduction on the things he stole, mostly in the first verse about the most unusual thing he ever stole, 'The most unusual thing I ever stole? A snowman'. The rest of the poem shows his negative side until at the end where he is shown to have a positive side. The message of the poem is about what to do in your life and that stealing is something that won't get you far in life. Abdul Soliman 10s ...read more.