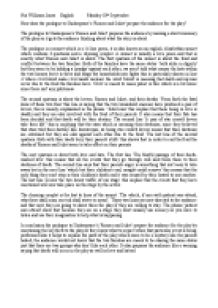 How does the prologue to Shakespeares 'Romeo and Juliet' prepare the audience for the play?

﻿Nia Williams-Jones English Monday 10th September How does the prologue to Shakespeare?s 'Romeo and Juliet' prepare the audience for the play? The prologue to Shakespeare's 'Romeo and Juliet' prepares the audience by making a short summary of the play so it gets the audience thinking about what the story is about. The prologue is a sonnet which is a 14 line poem, it is also known as an english, elizabethan sonnet which contains 3 quatrains and a rhyming couplet. A sonnet is usually a love poem and that is exactly what 'Romeo and Juliet' is about. The first quatrain of the sonnet is about the feud and conflict between the two families. Both of the families have the same status ' both alike in dignity' but they seem to be holding a 'grudge' against each other, we aren't told ...read more.

It also means that their fate has been decided and that death will be their destiny. The second line 'A pair of star cross'd lovers take their life? this is implying that the stars which is meaning their destinies, since they believed that stars told their destiny like horoscopes, so being star cross'd lovers means that their destinies are entwined but they are also against each other due to the feud. The last line of the second quatrain 'doth with their death bury their parents' strife' this shows that in order to end the feud the deaths of Romeo and Juliet seem to take affect on their parents. The next quatrain is about both love and hate. The first line 'The fearful passage of their death-marked love' this means that all the events that they go through will lead them them to their destinies of death. ...read more.

The phrase 'patient ears attend' show that because they are on a stage they don't usually use scenery so you have to listen and use their imagination to help what is happening. In conclusion the prologue to Shakespeare?s 'Romeo and Juliet' prepare the audience for the play by mentioning the key facts to the play so they know what to expect when that particular event is being performed also it helps to explain the parts of the play which seem to be a mystery like the parents hatred, the audience would not know that the two families are meant to be sharing the same status just that there are two groups who don't like each other. It also prepares the audience like a warning saying that death will occur in the play as well as love and hatred. ...read more.