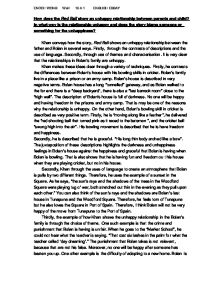 How does the Red Ball show an unhappy relationship between parents and child? In what way is the relationship unhappy and dose the story blame someone or something for the unhappiness?

How does the Red Ball show an unhappy relationship between parents and child? In what way is the relationship unhappy and dose the story blame someone or something for the unhappiness? Khan conveys how the story, Red Ball shows an unhappy relationship between the father and Bolan in several ways. Firstly, through the contrasts of descriptions and the use of language. Secondly, through use of themes and characterisation. It is very clear that the relationships in Bolan's family are unhappy. Khan makes these ideas clear through a variety of techniques. Firstly, he contrasts the differences between Bolan's house with his bowling skills in cricket. Bolan's family live in a place like a prison or an army camp. Bolan's house is described in very negative terms. Bolan house has a long "tunnelled" gateway, and as Bolan walked to the far end there is a "deep backyard', there is also a "last barrack room" close to the "high wall". The description of Bolan's house is full of darkness. No one will be happy and having freedom in the prisons and army camp. That is may be one of the reasons why the relationship is unhappy. On the other hand, Bolan's bowling skill in cricket is described as very positive term. ...read more.

Khan makes the relationship more clear through the characterisation of Bolan and his father. Firstly, Bolan watches the boys playing cricket every night. "Since they moved to Port of Spain, he had been coming to Woodford Square in evenings." That's shows Bolan is a shy character. Secondly, he touches the powerful looking statue. "He had touched the strong green veins running down the man's legs with fear." That's shows he is scared, perhaps because he is new to the city and the statue is big and has a very strong feeling to Bolan. It also shows that the son is trying hard to get in the group. But on the other hand, the father isn't trying hand because he letting himself down. The statue also shows the coldness. "Half expecting the serve lips to smile, or even curl in anger at him" In some way, the statue is opposite to Bolan, perhaps a bit like his father. The characterisation of Bolan's father also helps to explain the relationship more clearly. He only tidies himself up for visit to Tunapuna and boasts about earning three dollars a day. "He would get a shave and a trim, and tell everyone that he was making three dollars a day at the American Base." ...read more.

"The boy saw him only late in the evenings now" So their relationship is going further and further. The story also blames Bolan. As the father says, "as soon as we did have a li'l money save we have to go and get a ..." As the mother answers, "A child?" That's show us that the father is blaming the child, Bolan for poorness. At the end of the story, there is twist about the father and the male statue. Bolan Dreamt that the statue can talk, and the statue says, "we love you like nothin' else in the whole whole world." However, when he wakes up he notices that his dream is true but the words were said in his father mouth. That's shows that the father loves his son, but he find it difficult to show and expressed his felling. Therefore, the story blames the statue as Bolan's father. In conclusion, the Red Ball shows us very clear that the relationship between Bolan and his father is unhappy. The move from Tunapuna to Port of Spain didn't change the life of the family a lot. Moreover, the poverty does give the family much unhappiness. The story also blames Bolan stole money, the suffering, time, Bolan and the statue for unhappiness. Finally, we know that the father loves Bolan. ?? ?? ?? ?? ENOCH WONG WaH 10 A 1 ENGLISH ESSAY ...read more.