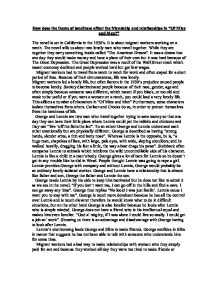 How does the theme of loneliness affect the friendship and relationships in &quot;Of Mice and Men?&quot;

How does the theme of loneliness affect the friendship and relationships in "Of Mice and Men?" The novel is set in California in the 1930's. It is about migrant workers working on a ranch. The novel tells us about two lonely men who travel together. While they are together they carry something inside called "The American Dream". It was a dream that one day they would make money and have a place of their own but it was hard because of The Great Depression. The Great Depression was a result of the Wall Street crash which meant economy declined and people worked hard but got low wages. Migrant workers had to travel from ranch to ranch for work and often stayed for a short period of time. Because of their circumstances, life was lonely. Migrant workers led a lonely life, but often factors in the 1930's prejudice caused people to become lonely. Society discriminated people because of their race, gender, age and often simply because someone was different, which meant if you black, or too old and weak to be useful or if you were a women on a ranch, you could lead a very lonely life. This affects a number of characters in "Of Mice and Men" Furthermore, some characters isolate themselves from others. Carlson and Crooks do so, in order to protect themselves from the harshness of life. ...read more.

Lennie talks ambitiously about the dream and Candy says, "An' they give me two hundred an' fifty dollars cause I los' my hand. An' I got fifty more saved up right in the bank, right now". He says he could be useful when they buy yhe place and feed the chickens. The dream makes Candy more confident after his dog had got shot. Curley's Wife's death made Candy give up hope on the dream because he knew things were not going to work. This happened before Curley's wife was killed. As readers we feel sorry for Candy because he has nothing left in his life now. At the time of the novel everyone was prejudice and racist to Crooks because he is black. Crooks works in the "horse stable". He is not allowed to step in the bunk house with the other men so he is separated and is forced to sleep in the "horse stable" with the horses. Crooks is independent, one of the loneliest characters in the novel and keeps to himself. He is bitter to other people because of the way he is treated. He is not used to socializing with others. We notice this when Lennie suddenly appears at "horse stable" to ask Crooks if he could check on his pup and Crooks replies bitterly, "Well I got a right to have a light. ...read more.

Lennie says, "Oh! That's nice". He gets carried away and starts stroking harder. Curley's wife yells out "stop". Lennie panics and covers her mouth and nose with his big hand. He accidentally kills her. Steinbeck shows us that the death of Curley's wife and Lennie are both due to loneliness. As readers we are affected by their death because we can se what excess of too much loneliness can come to. We also feel very sorry for Curley's wife because she could have had a much better life being a movie star but ended up in the wrong environment and now, dead. The life she led was unfair. We feel sorry for Lennie because he does not realise what he does and George has no choice but as a good friend, George shot Lennie. George also learnt that its better he shot as a favour of a good friend than to have Curley to kill him with revenge. As soon as George saw Curley's wife's body he knew Lennie had committed a big mistake. Candy lost hope in the "dream" because he knew things were not going to work out, whereas everyone else got their guns and wanted to kill Lennie. Steinbeck shows us that all the characters in "Of Mice and Men" are affected by loneliness in one way or another. As readers we learn from the novel that loneliness can lead to death. We learn we should not choose to be lonely. We are all alone in this huge universe so companionship should be treasured. ...read more.