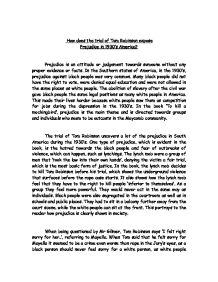 How does the trial of Tom Robinson expose Prejudice in 1930&amp;#146;s America?

How does the trial of Tom Robinson expose Prejudice in 1930's America? Prejudice is an attitude or judgement towards someone without any proper evidence or facts. In the Southern states of America, in the 1930's, prejudice against black people was very common. Many black people did not have the right to vote, were denied equal education and were not allowed in the same places as white people. The abolition of slavery after the civil war gave black people the same legal positions as many white people in America. This made their lives harder because white people saw them as competition for jobs during the depression in the 1930's. In the book 'To kill a mockingbird', prejudice is the main theme and is directed towards groups and individuals who seem to be outcasts in the Maycomb community. The trial of Tom Robinson uncovers a lot of the prejudice in South America during the 1930's. One type of prejudice, which is evident in the book, is the hatred towards the black people and fear of outbreaks of violence, which can happen, such as lynchings. ...read more.

Hence, if a black person felt sorry for you, it was an insult. The white people were frightened for their own position in society, and the only reason Tom Robinson was found guilty, was to maintain tradition in the town. Tom Robinson suffered the most in the book and endured racism and injustice just because of the colour of his skin. The jury at court were biased, and their conviction showed the strong racism in Maycomb. Even if the jury did think him innocent, they could not say, as they would risk being attacked by racist white people of the community. In the book it was obvious that Bob Ewell was a mean man, and was very obvious that he abused his daughter Mayella, and it was him that attacked Mayella that night, not Tom Robinson. Atticus Finch knew this, and even questioned Mayella in court 'What did your father see in the window, the crime of rape or the best defence to it? Why don't you tell the truth, child, didn't Bob Ewell beat you up?'. Tom Robinson also gave evidence to prove this true, as when he was making his statement he says, 'She says she never kissed a grown man before an' she might as well kiss a nigger. ...read more.

In my eyes, he was the better man, and nowadays, if the same thing had happened, he would not have been convicted for rape. But, in those days white people could do what they liked. Atticus Finch also had to deal with problems from the white people of Maycomb, just because he was helping out a black person. Atticus believed that all people were equal, and that all people had the right to a fair trial. He believed that Tom Robinson was innocent, and tried to make sure he was set free, even after he was convicted. Atticus stood up to people in a respectable and gentlemanly way, and never retaliated in violence or insults. Bob Ewell spat in his face for helping Tom Robinson, but Atticus merely wiped his face and walked on. Doing that to another man would surely provoke him to act violently. Atticus represented Tom even though he knew success was unlikely, showing real courage, and made a stand against racial prejudice in the community. This book shows many types of prejudice, racial prejudice being the main one. Racists are shown to be the lesser people, resulting in violence and insults, wheras those who are not racists seem to be the better people, showing respect and courage. Laura Kantor ...read more.