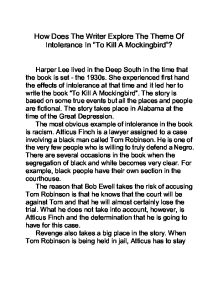 How Does The Writer Explore The Theme Of Intolerance In &quot;To Kill A Mockingbird&quot;?

How Does The Writer Explore The Theme Of Intolerance In "To Kill A Mockingbird"? Harper Lee lived in the Deep South in the time that the book is set - the 1930s. She experienced first hand the effects of intolerance at that time and it led her to write the book "To Kill A Mockingbird". The story is based on some true events but all the places and people are fictional. The story takes place in Alabama at the time of the Great Depression. The most obvious example of intolerance in the book is racism. Atticus Finch is a lawyer assigned to a case involving a black man called Tom Robinson. ...read more.

They are eventually persuaded to stop by Scout, who unwittingly reminds them of who they are and how inhuman what they are trying to do really is. Also, Bob Ewell comes back to Atticus to take his children as a form of revenge. Although Tom Robinson was dead and Ewell had won the case, Bob Ewell was not a great hero, as he had expected, but rejected even more by society. The whole town new that it was Mayella was guilty and not Tom Robinson and they hated Bob Ewell for sending him to his death and breaking up his family. There is also a degree of resentment for others in the book. ...read more.

Mrs Dubose, a neighbour of the Finch family, also insults Jem and Scout, saying how they have been brought up with no control, and that their father is "no better than the trash he works for". There are many different relationships that go on in the book, some are bad, such as the ones I have just described, but many are good. For example, by the end of the trial, nearly every single member of the audience was backing Atticus and Tom Robinson because they knew that he was not guilty. Also, Boo Radley turns out to be one of the most friendly, helpful people in the story. Amid the arguments and discriminations is goodness and love that is slowly blooming and growing, for, as Ms Maudie says, "people are changing". ...read more.