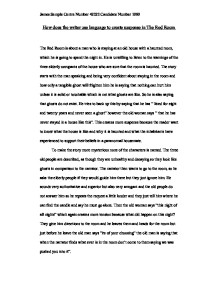 How does the writer use language to create suspense in The Red Room The Red Room is about a man who is staying at an old house with a haunted room, which he is going to spend the night in. He is unwilling to listen to the warnings of the three elderly occupants of the house who are sure that the room is haunted. The story starts with the man speaking and being very confident about staying in the room and how only a tangible ghost will frighten him he is saying that nothing can hurt him unless it is solid or touchable which is not what ghosts are like. So he is also saying that ghosts do not exist. He tries to back up this by saying that he has " lived for eight and twenty years and never seen a ghost" however the old woman says " that he has never stayed in a house like this". This creates more suspense because the reader want to know what the house is like and why it is haunted and what the inhabitants have experienced to support their beliefs in a paranormal housemate. To make the story more mysterious none of the characters is named. ...read more.

so he must believe that the thing in the room is living so we realise that his confidence is just a mask that he had put on for the old people. When he goes into the red room he is very anxious because he remembers the stories about people who had died in the room. The room is very dark and it seemed that the darkness was growing and advancing towards him so he had turned the darkness into a person. This is personification which he does to emphasize the point that he is only scared of living things. He says "his candle was a little tongue of light" this is his way of showing his vulnerability . He goes around the room examining all of the walls , pictures and mirrors he is doing this because he believes that there must be a reasonable explanation to what has been happening in the room. He is trying to find evidence to support his theory that some one can gain access to the room via a secret entrance and create a ghostly apparition . His search proves fruitless so the writer has created more suspension as it supports the claims of the old people. ...read more.

He wakes up and it is daytime which represents hope and goodness, as there is now no darkness he has got his senses back. The first people he sees are the three old pensioners who are surprisingly warm to him even though he was so rude to them the night before and they did not say I told you so. They infact were asking him question after question. They wanted to know who the ghost who is haunting the room is. Even after a night, which he has just had, he still keeps to this remarks that ghosts aren't real and says the thing, which haunts the room, is 'Fear' he again turns this fear into a person by giving it a capital letter. The writer creates suspense in the story by mystery, use of time and descriptive writing setting the scene and rekindling the child hood fear of the dark and what may lurk there and his use of time saying that just after midnight the candles go out as this is the hour we associate with witches and ghosts. The narrator also becomes more sympathetic towards the old people in the story as he has experienced the fear they for told of the fear of the unknown that his imagination believed lurked in the darkness of the room. James Semple Centre Number 43232 Candidate Number 1090 ...read more.