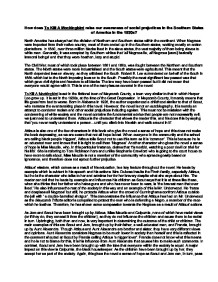 How does To Kill A Mockingbird raise our awareness of social prejudices in the Southern States of America in the 1930s?

How does To Kill A Mockingbird raise our awareness of social prejudices in the Southern States of America in the 1930s? North America has always had the division of Northern and Southern states within the continent. When Negroes were imported from their native country, most of them ended up in the Southern states, working mostly on cotton plantations. In 1850, over three million blacks lived in the slave states, the vast majority of them being slaves to white men. Generally, it was accepted by Southern whites that 'all Negroes lie, all Negroes [were] basically immoral beings' and that they were heathen, lazy and stupid. The Civil War, most of which took place between 1861 and 1865, was fought between the Northern and Southern states. The North states were more industrialised and the South states were agricultural. This meant that the North depended less on slavery, so they criticised the South. Robert E. Lee surrendered on behalf of the South in 1865 which led to the North imposing laws on to the South. Possibly the most significant law passed was that which gave civil rights and freedom to all blacks. The law may have been passed but it did not mean that everyone would agree with it. This is one of the many issues covered in the novel. To Kill A Mockingbird is set in the fictional town of Maycomb County, a town very similar to that in which Harper Lee grew up. ...read more.

Such innocent children cannot be shielded from the views of the society in which they live, and the two children are excellent examples of this. Though they have been brought up by Atticus, Miss Maudie and Calpurnia, they are still under the influence of prejudice in the society. While outside the court house with Dill, Scout makes a comment that is not expected from a child brought up in that fashion: 'Well, Dill, after all he's just a Negro.' This clearly demonstrates the effects that the society has had on her, which cannot be avoided even when they have been brought up in a very educated environment. Scout should know better but this cannot be avoided. Even Atticus knows this and he says that he hopes 'that Jem and Scout come to [him] for their answers instead of listening to the town.' They also seem to accept many things which are so ingrained in society. For instance, when they enter the balcony in the court house, 'four Negroes [rise] and [give them] their front row seats.' The children accept that it is right that this should happen, as the Negroes are considered lower in society. The reader knows that it is wrong but this is what happened at the time. Dolphus Raymond is a character who demonstrates how ingrained things are in society. Scout describes Mr. Raymond as an 'evil man' even though she does no know him, and again this sudden conclusion comes as a result of the influences of the society. ...read more.

To Kill A Mockingbird places issues of social prejudices into a fictional context by using social and historical influences. All the characters have been affected by the history of the country at the time, as they have been affected mainly by the new laws passed by the Northern States which give the Negroes freedom. The white society lives with the fear that the black people could take over the town as they could with their knowledge of agriculture. This causes them to discriminate the Negroes as this is the only way that they can keep their power, so it causes racism within the society. Racism and other prejudices were embedded in society, just as some are today. This is why it is important for people to stand up and question it, and furthermore, it is important that such people exist. In this novel, the character that springs to mind is Atticus. He questions racism and tries his hardest to fight it. He does this by leading by example - he does what he believes is right. He treats everyone with equal respect and intelligence, and in doing so, he educates his children, Maycomb and the reader. People like this do exist and examples include Martin Luther King, Nelson Mandela and Gandhi. It encourages the reader to do the same, and by standing up for what you believe, good will eventually be the outcome. ...read more.