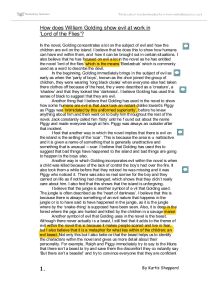 How does William Golding show evil at work in Lord of the Flies?

How does William Golding show evil at work in 'Lord of the Flies'? In the novel, Golding concentrates a lot on the subject of evil and how the children are evil on the island. I believe that he does this to show how humans can have evil within them, and how it can be brought out in certain situations. I also believe that he has focused on evil a lot in the novel as he has entitled the novel 'lord of the flies' which is the means 'Beelzebub' which is commonly used as a word to describe the devil. In the beginning, Golding immediately brings in the subject of evil as early as when the 'party of boys', known as the choir joined the group of children, they were wearing 'long black cloaks' when everyone else had taken there clothes off because of the heat, they were described as a 'creature', a 'shadow' and that they looked like 'darkness'. I believe Golding has used this sense of black to suggest that they are evil. Another thing that I believe that Golding has used in the novel to show how some humans are evil is that Jack took an instant dislike towards Piggy as Piggy was 'intimidated by this uniformed superiority', before he knew anything about him and then went on to bully him throughout the rest of the novel. Jack constantly called him 'fatty' until he found out about the name Piggy and made everyone laugh at him. ...read more.

He sees Henry, playing with the animals. He threw a stone at Henry but 'threw to miss' this shows that he still had something civilised physiologically stopping him from hitting Henry, although he had a strong urge to do so. This shows that Roger had evil intensions and has evil within. I believe that Golding has used this example of Roger to try and make us think about where evil comes from. He uses Jack and Roger as examples. When Jack arrives on the island he is head boy and head of the choir, this suggests that he is a well-behaved child and is good. However as the novel moves on he becomes sinister and evil. In contrast to this, Roger has evil intensions from the start and wants to hurt Henry. I believe that Golding has done this to try and debate whether evil is occurred by nature or nurture. I believe that the mask is another symbol of evil in the novel. This is because when Jack goes to kill the piglet at the first attempt, he was unable to do it because there was still something civilised about his character. However when he puts the mask on it takes away his identity. Jack becomes an 'awesome stranger', which is a quote that perfectly describes the change that has occurred in the character of Jack, the mask has taken away his identity and his civilised nature and he has become savage. ...read more.

When Simon is talking to the Lord of the Flies, because it is being associated with the devil it is as though good is against bad. The Lord of the Flies then threatens Simon in a 'headmasters voice' and calls him a 'silly little boy'. The Lord of the Flies tells Simon that they are going to have fun on the island and that he shouldn't try to stop them 'or else'. The Lord of the Flies also says that 'you'll meet me down there' I believe that this could be a metaphor for hell. It is ironic that soon after this experience, the children kill Simon and the 'Lord of the Flies' is a symbol of the evil within the children. To conclude my essay, I believe that Golding has focused on the theme of evil within the novel to show us how humans can be evil. He wants to show what children can become if they are not guided in the right direction. I also believe that he has focused on the theme of evil as he wants us to consider whether evil is born with all humans and each person has the capability of evil inside them of it is to do with there surroundings. I feel that Golding used a good variety of characters to demonstrate the different characteristics when they are put in a situation and how different types of people can react and how people can be led. I think that Golding want to show people how humans can be evil in every day life and we don't even notice it. 1. By Kurtis Sheppard ...read more.

A good attempt at answering the question. Logically structured and remains focused on the essay question using topic sentences at the beginning of paragraphs.
Some perceptive comments and textual references enhance some simplistic explanation.
***