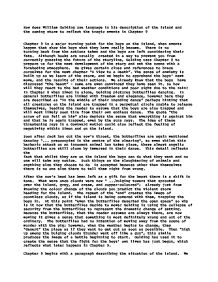 How does William Golding use language in his description of the island and the coming storm to reflect the tragic events in Chapter 9 Chapter 9 is a major turning point for the boys on the island, when events happen that show the boys what they have really become. There is no turning back from the actions taken and the boys are left considering their fate. Although books are usually created in a way to prevent you from correctly guessing the future of the storyline, Golding uses Chapter 8 to prepare us for the next development of the story and set the scene with a foreboding atmosphere. He gives certain clues and references to brace ourselves for the next chapter "A View to a Death". The sense of anxiety is built up as we learn of the storm, and we begin to apprehend the boys' next move, and the results of their actions. We already know that the boys have discussed "the beast" - some are even convinced they have seen it. So how will they react to the bad weather conditions and poor sight due to the rain? In Chapter 8 when Simon is alone, Golding pictures butterflies dancing. In general butterflies are linked with freedom and elegance, however here they are described as "in the middle of their unending dance" perhaps hinting that all creatures on the island are trapped in a perpetual circle unable to release themselves, leading the reader to assume that the boys are also trapped and will most likely soon tire from their own endless dance. The quote "the arrow of sun fell on him" also depicts the sense that everything is against him and that he is again trapped, even by the suns rays. The idea of these threatening rays in a downward motion could also reflect the feeling of negativity within Simon and on the island. ...read more.

A littleun breaks the biguns circle, ironically creating a horseshoe; horseshoes are usually thought of as good luck however not so in this situation. "Him! him!" the littleun could still be made out pointing or looking at something. At this point the reader cannot be sure what this thing is, just that it came "darkly, uncertainly" suggesting it to be sinister and evil in some way. The boys repeat their chant "Kill the beast! Cut his throat! Spill his blood!". It is only when the horseshoe lets the "crawling thing" in that the reader finds out that the "beast" is actually Simon, "Simon was crying out something about a dead man on a hill". He has returned from finding out the secret of the original beast on the hill found by sameneric - that it is in fact a dead pilot. As Simon is described as "crawling" you can imagine how the boys could mistake him for a beast amidst the rain and wind blurring their vision, they were confused by the excitement and commotion. Simon has also had a couple of injuries such as a nose bleed and falling unconscious so he wouldn't look particularly normal or what the boys were used to seeing. Compared to them, excited and lively, Simon is bedraggled, he is looked upon as an outsider. However we, the reader have it confirmed that it is in fact Simon, so we feel powerless against the boys as we have no way of telling them the truth. Golding has successfully made us feel helpless, and all we can do is sit back and read, unable to stop the events unfolding. The chant carries on with the monosyllabic words creating a steady pace making the beat as if it was the beat of the organism's heart made by the boys. This keeps the boys going together and as one, they can finally do something together as a group, and they like the way it gives them so much power. ...read more.

When Simon's body is being carried away by the waters it is referred to as "Simon's dead body". We now know that he is truly dead and he has finally got his identity back, he has his dignity along with his name; he is no longer known as "the beast" or "it", in which case the boys will perhaps still believe that it is out there. "The dead body moved out towards the open sea". Although it is horrible to think of what happened to Simon, the poetic text throughout the last few paragraphs of Chapter 9 makes you almost forget why Simon is there, and instead believe that he died because nature intended it. Golding has created a sense of serenity and peace about him, he dies in nature and you think nothing more. Chapter 9 is the most crucial part of "The Lord of the Flies"; it is the climax of the book, which is mostly due to the description of the island. Golding's simple techniques, for example his reference to the butterflies and energy of the storm, cause such intense, heightened emotions that you know and sense something irreversible is going to happen. The novel is similar to a roller coaster. For the first few chapters you experience a few bumps and before long you can feel yourself on a steady path upwards. Then at Chapter 9 with the storm the ride becomes very steep and suddenly you come crashing down at Simon's death. The ride comes to a halt. You are shocked and disturbed by the murder but not surprised, as Golding has already created the idea of something dark and devious in your mind. By the end of Chapter 9 the atmosphere is broken and a weight lifted, the boys realise their plunder and most begin to return to their roots. Golding has created a pivot in the book turning a climax of angst and torment into a peaceful death which releases all the tension. ...read more.