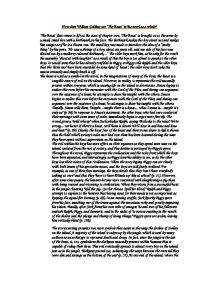 How does William Golding use 'The Beast' in his novel as a whole?

How does William Golding use 'The Beast' in his novel as a whole? 'The Beast' first comes to life at the start of chapter two. 'The Beast' is brought on to the scene by a small, timid boy with a birthmark on his face. The birthmark makes the boy stand out and makes him unique as if he is a chosen one. The small boy was made to introduce the idea of a "snake thing" by his peers. 'He was a shrimp of a boy, about six years old, and one side of his face was blotted out by a mulberry coloured birthmark...' The older boys mock him, as he asks for the conch the assembly "shouted with laughter" as a result of this the boy is too afraid to speak to the other boys. It would seem that he has already confided in Piggy, so Piggy tells Ralph and the older boys that the 'little uns' have been unsettled by some kind of 'beast', the older boys don't take the matter seriously and simply brush it off. The beast is used as a symbol in the novel, in the imaginations of many of the boys, the beast is a tangible source of evil on the island. ...read more.

When they return from a successful hunt in the jungle chanting "Kill the pig. Cut her throat. Spill her blood," Ralph and Piggy attempt to explain to the hunters that having meat for their meals is not as important as keeping the signal fire burning (p. 69). In an ensuing scuffle, Jack knocks Piggy specs from his face, smashing one of the lenses against the mountain rocks and greatly impairing his vision. Finally, after Jack forms his own tribe of savages, he and two of his followers ambush Ralph, Piggy, and Samneric, and in the midst of "a vicious snarling in the mouth of the shelter and the plunge and thump of living things," Piggy's specs are stolen, leaving him virtually blind (p. 186). The story's setting presents two more symbols that assist in showing the decline of civility on the island. A majority of the island is taken up by the jungle, which is used by many authors as an archetype to represent death and decay. In fact, since the jungle is the lair of the beast, it, too, symbolizes the darkness naturally present within humans that is capable of ruling their lives. This evil eventually spreads to almost every boy on the island, just as in the jungle, "darkness poured out, submerging the ways between the trees till they were dim and strange as the bottom of the sea" (p. ...read more.

As an archetype in literature, a rock can symbolize strength and power, and since this rock is red, it also represents violence. It is Roger who feels strong and powerful as he stands on the ledge above Piggy. "High overhead, Roger, with a sense of delirium abandonment, leaned all his weight on the lever" (p. 180). When the rock lands below, it not only strikes Piggy, but it also shatters the conch shell. Up to that point, Piggy and the conch had been two of the few representations of civilization and common sense on the island. However, when the rock causes both of these to cease to exist, all order on the island is brought to an end, and the boys, who express no regrets over the death of Piggy, have fully become savages. In conclusion, Lord of the Flies is a story that portrays the dark, deteriorating life that results from mankind's inherent capacity for evil, which is allowed to control humans when they are freed from the rules of society. Throughout the novel, Golding uses many different objects as symbols to illustrate this theme. Some of those objects would be insignificant in real life and would most likely be taken for granted. However, in Lord of the Flies, each of the previously mentioned symbols is vital to the story's theme. ...read more.

This essay begins well and throughout the response there is some very good analysis taking place; however the second half of the essay does not relate to the question so in order for this to gain a higher mark the question would need to be changed or the response made more focused.