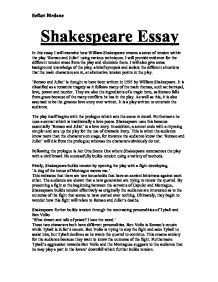 How does William Shakespeare create a sense of tension within the play Romeo and Juliet(TM)?

Shakespeare Essay In this essay I will examine how William Shakespeare creates a sense of tension within the play 'Romeo and Juliet' using various techniques. I will provide evidence for the different tension areas from the play and elucidate them. I will also give some background knowledge of the play, a brief synopsis and isolate the different situations that the main characters are in, at alternative tension points in the play. 'Romeo and Juliet' is thought to have been written in 1595 by William Shakespeare. It is classified as a romantic tragedy as it follows many of the main themes, such as: betrayal, love, power and murder. They are also the ingredients of a tragic hero, as Romeo falls from grace because of the many conflicts he has in the play. As well as this, it is also assumed to be the greatest love story ever written. It is a play written to entertain the audience. The play itself begins with the prologue which sets the scene in detail. Furthermore he uses a sonnet which is traditionally a love poem. Shakespeare uses this because essentially 'Romeo and Juliet' is a love story. ...read more.

This scene also creates tension as the guards could have easily caught Romeo trespassing. Shakespeare builds tension at the wedding with the Friar's warning. 'These violent delights have violent ends.' This confirms that the friar realizes that fate is against both Romeo and Juliet and so he alerts them of a tragic ending. Furthermore with the Friar talking about death, this creates additional dramatic irony because the audience know that the marriage cannot last. The Friar perceives that there is something sinful about the marriage because he is marrying two lovers, which means he is uniting two families who have had bitterness for each other for generations. This creates more tension as the audience wonder how this will affect both of the lovers' deaths. Also the use of the oxymoron 'Violent Delights' creates juxtaposition for the audience on the one hand because they are happy about the marriage, but at the same time they feel sorrow as they know it won't last. Another tension point is the scene where Tybalt and Mercutio end up tussling with each other. 'Tybalt you rat catcher, will you walk?' This clash is cunningly unlike the others so far because it is between Tybalt and surprisingly Mercutio who is impartial to both the Capulet and Montague households. ...read more.