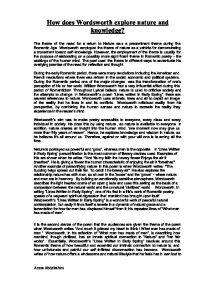 How does Wordsworth explore knowledge and nature?

How does Wordsworth explore nature and knowledge? The theme of the need for a return to Nature was a predominant theme during the Romantic Age. Wordsworth employed the theme of nature as a vehicle for demonstrating a movement toward self-knowledge. However, the employment of the theme is usually for the purpose of elaborating on a possibly more significant theme in Romantic poetry - the workings of the human mind. The poet used the theme in different ways to accentuate his overlying premise of the need for reflection and thought. During the early Romantic period, there were many revolutions including the American and French revolutions where there was reform in the social, economic and political systems. During the Romantic period one of the major changes was the transformation of one's perception of his or her world. William Wordsworth had a very influential effect during this period of Romanticism. Throughout Lyrical ballads nature is used to criticise society and the attempts to change. In Wordsworth's poem "Lines written in Early Spring", there are several references to nature. ...read more.

Wordsworth's "Lines Written in Early Spring" is a wonderful work of peaceful natural contemplation, but sadly it finds itself a reverie in a dynamic of natural grace and a lamentation for how far man has displaced himself from it; his repeated lines of "What man has made of man". It is the second stanza of the poem that the audiences are given the theme of the poem when Wordsworth writes "And much it grieved my heart to think / What man has made of man." Wordsworth, in his reflection of "What man has made of man", is describing how mankind, though civilized, has an innate spiritual connection to "Nature" and "her fair works". Essentially, Wordsworth's "Lines Written in Early Spring" revolves around this Romantic theme of how beautiful and essential our intrinsic connection to nature is, and how unfortunate and painful our self-inflicted disconnection has become. Wordsworth writes of how nature offers a wholesome and natural lifestyle that he feels has been lost to the pointlessness and monotonous of civilization and the pursuit of contemporary capitalistic gain. ...read more.

He portrays Nature as a person, a divine female, a natural force that, though perhaps not usurping God's role in Creation, still plays a direct role in the conception of human nature. Humanity, Wordsworth would have believed, however far it removes itself from the natural world, can never cut the connection that it shares with natural life, scenery, and beauty. Wordsworth has successfully captured one of the greatest themes of Romanticism: that humanity, how far it attempts to distance itself from the natural world through its "civilization", is still, and will always be, a part of nature. Indeed, Wordsworth is continually inspired and led into transcendent moments by his experiences in Nature. These experiences bring to his mind a wide variety of contemplations and considerations that can only be expressed, as he writes in "Expostulation and Reply," in "a wise passiveness". This poem compares Nature with what man makes (Science, Books, "Knowledge", and Art). The last two stanzas criticise those who attempt to explain and overanalyse the world, destroy the beauty in nature when doing so - "We murder to dissect." Instead we should just observe life around us, accept it, and feed our minds in a "wise passiveness." ?? ?? ?? ?? Amna Abdelrahim ...read more.