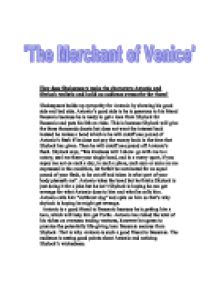 How dose Shakespeare make the characters Antonio and Shylock realistic and build up audience sympathy for them? The Merchant of Venice

ass How dose Shakespeare make the characters Antonio and Shylock realistic and build up audience sympathy for them? Shakespeare builds up sympathy for Antonio by showing his good side and bad side. Antonio's good side is he is generous to his friend Bassanio because he is ready to get a loan from Shylock for Bassanio and puts his life on risks. This is because Shylock will give the three thousands ducats but dose not want the interest back instead he makes a bond which is he will cutoff one pound of Antonio's flesh if he dose not pay the money back in the time that Shylock has given. ...read more.

Antonio takes the bond but he thinks Shylock is just doing it for a joke but he isn't Shylock is hoping he can get revenge for what Antonio dose to him and what he calls him. Antonio calls him "cutthroat dog" and spits on him so that's why shylock is hoping he might get revenge. Antonio is a good friend to Bassanio because he is getting him a loan, which will help him get Portia. Antonio has risked the total of his riches on overseas trading ventures, however he agrees to promise the potentially life-giving loan Bassanio secures from Shylock. That is why Antonio is such a good friend to Bassanio. The audience is seeing good points about Antonio and noticing Shylock's wickedness. ...read more.

To show Christians and Jews never would get on in that time. Hear is a phrase written in the play "ancient grudge" meaning between Christians and Jews accusation fly that Jews killed Jesus. This shows Antonio is not all good, as he seems to be in the beginning of the play, which the audience in that time would have thought Antonio is a good person but now they would think he is very evil. Shylock is starting to fade his evilness away and turning into a good person, but still in the time the play was written the audience would still think bad thoughts about Shylock but now the audience would know Shylock character is realistic. ...read more.