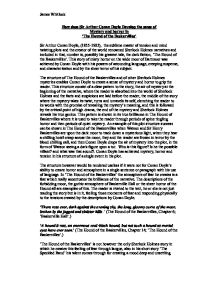 How dose Sir Arthur Conan Doyle Develop the sense of

How dose Sir Arthur Conan Doyle Develop the sense of Mystery and horror in 'The Hound of the Baskervilles' Sir Arthur Conan Doyle, (1855-1935), the sublime master of tension and mind twisting plots and the creator of the world renowned Sherlock Holmes narratives and included in that, number is, possibly his greatest tale, the dark fiction, 'The Hound of the Baskervilles'. This story of misty horror on the wide moor of Dartmoor was achieved by Conan Doyle with his powers of astounding language, creeping suspense, and characterisation and by the sheer terror of his subject. The structure of The Hound of the Baskervilles and of other Sherlock Holmes mysteries enables Conan Doyle to create a sense of mystery and horror to grip the reader. This structure consist of a clear pattern to the story, the air of mystery at the beginning of the narrative, where the reader is absorbed into the world of Sherlock Holmes and the facts and suspicions are laid before the reader, the middle of the story where the mystery takes its twist, turns and unravels its self, clenching the reader to its words with the promise of revealing the mystery's meaning, and this is followed by the critical point of high drama, the end of the mystery and Sherlock Holmes reveals his true genius. ...read more.

This is compared to the brilliant mind of Sherlock who works out the mystery in a short time and so his point of view will not do. Sir Henry Baskerville: 'A warden no doubt. The moor has been thick them.' Dr Watson (narrator): Well, perhaps his explanation may be the right one, but I should like to have some further proof of it. (The Hound of the Baskervilles, Chapter 9; 'The light upon the Moor') Conan Doyle also makes Holmes the kind of character who does not reveal his understanding of a mystery, not even to Watson when they are about to capture the villain and end the mystery, this conveniently keeps both the reader and other characters in the dark till the moment of action when any thing could come out of the mist. He also drops little snippets of information which tantalise the reader and Watson. 'Even now we have no clear case against this very wily man. But I shall be very much surprised if it is not clear before we go to bed.' (The Hound of the Baskervilles, Chapter 13; 'Fixing the nets'.) The Hound of the Baskervilles is a narrative which evokes fear and creates mystery so apparently unfathomable that it is as thick as a Dartmoor mist. It is a tale of true brilliance. ?? ?? ?? ?? James Whitlock ...read more.