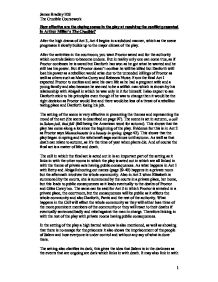 How effective are the closing scenes in the play at resolving the conflict presented in Arthur Miller(TM)s The Crucible?

How effective are the closing scenes in the play at resolving the conflict presented in Arthur Miller's The Crucible? After the high drama of Act 3, Act 4 begins in a subdued manner, which as the scene progresses it slowly builds up to the major climax of the play. After the activities in the courtroom, you want Proctor saved and for the authority which controls Salem to become undone. But in reality only one can come true, as if Proctor confesses he is saved but Danforth has won as he got what he wanted and he still has his power. But if Proctor doesn't confess he will be killed but Danforth will lose his power as a rebellion would arise due to the unneeded killings of Proctor as well as others such as Martha Corey and Rebecca Nurse. From the final Act I expected Proctor to confess and save his own life as he had a pregnant wife and a young family and also because he seemed to be a selfish man which is shown by his relationship with Abigail in which he was only in it for himself. I also expect to see Danforth stick to his principles even though if he was to change then it would be the right decision as Proctor would live and there would be less of a threat of a rebellion taking place and Danforth losing his job. The setting of the scene is very effective in presenting the themes and representing the mood of the act (the scene is described on page 97). The scene is set in autumn, a cell in Salem jail, that fall (fall being the American word for autumn). This shows that the play has come along a lot since the beginning of the play. Evidence for this is in Act 2 as Proctor says Massachusetts is a beauty in spring (page 42). ...read more.

The imagery used in the speech gets his views across, this can be shown when he says I will not crack its voice with whimpering he will carry on going by Gods word how ever immoral and not stray away by whimpering and allowing John to survive. You also see his arrogance when he still believes he is in control in the speech when he says I should hang ten thousand that dared to rise against the law this also shows he only has a one minded authoritarianism as the only way he feels he can discipline people is by hanging them but in actual fact it only makes the situation worse. Danforth also has another speech on page 106 which show his Christian attitudes to be quite ironic as well as being unfair towards Elizabeth. I say this because he says that if Elizabeth doesn't try to convince John to confess then she is stone which is ironic as he's the one which is stone as instead of letting them go as they are innocent he wants them to confess so he still has a good name in the village even though if Proctor is killed Danforth's name will be tarnished anyway. Another sign of ignorance is in Proctor's last exchange with Elizabeth when they are talking about Giles and his death, (page 108). It shows that Danforth kills people not only for "committing witchcraft" but also for refusing to comply with the courts and remaining independent like Giles did. This is again linked in with the Un-American Activities Committee as Miller himself comments on how people would be tortured for not telling the Committee of people who they knew were communists. Much of what Danforth says is ironic and for someone that is a representative of the church it seems as though he lacks moral values. His logic is unsound and his version of reality is the reason why the Proctors reject him. ...read more.

Parris' pleading heightens the tension as it shows how pathetic he is and also how selfish he is as he is only thinking about himself and his job and he knows he will lose it if Proctor dies. Hale's pleading does the same too as its ironic as he says take the shame away but him pleading like he is puts shame on him and also as he has encouraged Proctor to lie makes him shameful. The three drum rolls finish the play off effectively as it ensures the audience that Proctor is dead specified also by the description of them rattling like bones. Elizabeth's actions on the last page also heighten the drama as when she stares down the doorway where Proctor is being lead through it shows she is resigned to him dying and can't decide for him as she can't judge him. The drum roll drawing her attention to the window heightens the drama as she is looking out the window probably to see her husband hang and maybe that's why she needs the window to support herself. Her escape form Hales pleas close the matter once and for all as she is the only person who can really save John but as she won't judge him he won't live. The symbolism of the sun pouring down her face shows that after the death of John she will start a new. All these points help decide who is the triumphant. In my opinion I believe Proctor is the one who is triumphant as Danforth and the authorities have lost all respect due to the death of him. The final scenes show that Proctor has changed from being a pragmatist to being a man of principles as he wants to keep his name and not confess therefore losing respect, and as he has not lost any respect and in fact gained it, it furthers the point that he won and Danforth lost. James Bradley 10S The Crucible Coursework 1 ...read more.