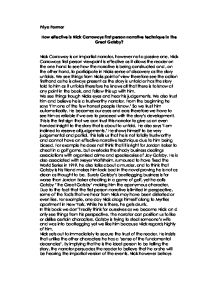 How effective is Nick Carraways first person narrative technique in The Great Gatsby?

Priya Parmar How effective is Nick Carraways first person narrative technique in The Great Gatsby? Nick Carraway is an impartial narrator, however not a passive one. Nick Carraways first person viewpoint is effective as it allows the reader on the one hand to see how the narrative is being constructed and , on the other hand, to participate in Nicks sense of discovery as the story unfolds. We see things from Nicks point of view therefore see the action firsthand as he is always present as the story is untold or has the story told to him as it unfolds therefore he knows all that there is to know at any point in the book, and follow this up with him. We see things trough Nicks eyes and hear his judgements. We also trust him and believe he is a trustworthy narrator. From the beginning he says 'I'm one of the few honest people I know.' So we trust him automatically. He becomes our eyes and ears therefore we have to see him as reliable if we are to proceed with the story's development. This is the first sign that we can trust this narrator to give us an even handed insight to the story that is about to unfold. ...read more.

Nick however betrays the readers trust. He makes judgements about events and chooses to respond to characters differently. The story is also told in retrospect-almost a year after the events of summer took place. This allows the narrator to look back on the events and make public judgement about Gatsby and the main characters even before the story starts. It is through Nicks eyes and ears that we form our opinions of the other characters. Anyone would say it is wrong to have an affair but due to the fact that Nick thinks highly of Gatsby and talks about him passionately we empathise with him for going after Daisy, a married woman with a child. There isn't much of a gap between the author and the reader as the reader becomes the author. Nick is a well suited to narrating The Great Gatsby because of his temperament. He says that he is tolerant, open minded, quiet, and a good listener. As a result of this people tell him secrets and talk to him therefore he always knows what's going on which helps develop the plot and seeing as we see things from his point of view we are also told the information as it comes. ...read more.

We still are not able to get inside Gatsby's head to see why is still hung up over Daisy and how he got so rich. He is a bit of a mysterious character. If a small passage or a few chapters were written in Gatsbys point of view we would gain an insight as to what his motives are and why he has all these house parties but is disconnected from the world. He is an illusionist who lives in a fantasy world and focuses on the past and builds his whole life around Daisy but without her. He organises parties to meet her and when she finally is in his life he acts a bit rude and cold i.e when she goes to his house for the first time. He also talks passionately about a kiss they had in the past but fails to realise that it is the past and believes that the past can repeat itself. Is we could see things from Gatsby's point of view, it would be clearer for us to understand why he does what he does and what is he is feeling. After all the book is named after him but we don't find out too much about him personally. A third person narrative technique would be better in telling us the viewpoints and thoughts of all the main characters. ...read more.