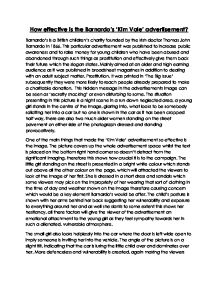 How effective is the Barnardos Kim Vale advertisement?

How effective is the Barnardo's 'Kim Vale' advertisement? Barnardo's is a British children's charity founded by the Irish doctor Thomas John Barnardo in 1866. This particular advertisement was published to increase public awareness and to raise money for young children who have been abused and abandoned through such things as prostitution and effectively give them back their future which the slogan states. Mainly aimed at an older and high earning audience as it was published in broadsheet magazines in addition to dealing with an adult subject matter, Prostitution. It was printed in 'The Big Issue' subsequently they were more likely to reach people already prepared to make a charitable donation. This hidden message in the advertisements image can be seen as 'secretly shocking' or even disturbing to some. The situation presenting in this picture is a night scene in a run down neglected area, a young girl stands in the centre of the image, glaring into, what looks to be somebody soliciting her into a car but no one is shown in the car as it has been cropped half way, there are also two much older women standing on the street pavement on either side of the photograph dressed and standing provocatively. ...read more.

The women in the background of the advertisement are standing evenly far apart on two different sides of the street, scantily dressed for the evening, portrayed in the image and standing on an angle in a provocative way signifying that they are engaging men to look at them. Like prostitution. It demonstrates how unpleasant a job resembling that would be like if you had to stand in the damp, dark, deserted streets and also relates to the way the girl is standing and dressed. The viewer would relate the women in the distance to the young girl in the front and start to see the story the advertisement is revealing. Lighting and settings also improves the effectiveness of the advertisement. The darkness of the night creates a fearsome effect, whilst the red and purple glow in the image indicates a sense of threatening danger and violence. The building poles suggest a sort of entrapment and being caged in. The area is also very abandoned and derelict this constructs a more chilling atmosphere as there is no one around to help if danger occurs. Audiences looking at the advertisement would react negatively to this image because people do not like to young children in harm. ...read more.

However the size of the text may be somewhat too small to comprehend or see. In comparison to the appearance of the text, the subject matter and language style of these four paragraphs are fundamental in influencing the reader to support the charity cause. Paragraph one has a very negative vibe towards the girls situation. The first word used 'Neglected' is powerfully emotive, it creates sympathy and gilt when reading in view of the fact that it is a word associated with being unloved and unwanted. She is then described as an 'easy victim' which then adds to the sympathy. On the other hand the second paragraph brings a more optimistic approach by bringing in 'Barnardo's help' the quotation 'an unhappy childhood need not mean an empty future' counter balances; giving a bad point and overlapping it with a good point. This shows the readers that there is still a chance for these children and they are worth helping. The third paragraph kick starts with a personal pronoun 'We' to include readers and make them feel welcome and ends with an encouraging rule of three 'home, school and the local community.' to describe where they will be helping. Giving the audience an insight into what there donation would be spent on will persuade them into giving. To end off the text pleads the reader to donate and give useful information to do so. ...read more.